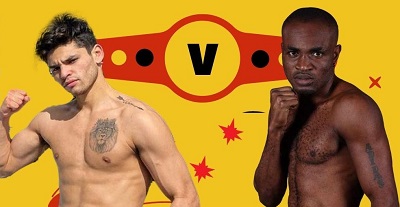 Tagoe (right) and Garcia set to clash on April 9

GHANA’S former International Boxing Organisation (IBO)lightweight champion, Emmanuel Tagoe, has been favoured to work his way back toglory by getting a shot at the title – and knocking it home.

Ghana has been without a world champion since December 2018when Isaac Dogboe lost his WBO junior featherweight world crown to Mexico’sEmanuel Navarrete Martínez.

However, Communications Director of the Ghana BoxingAssociation (GBA), Mohammed Amin Lamptey, believes the 33-year-old Tagoe haswhat it takes to upstage the applecart and get the undefeated Garcia out of hisway.

“There’s no shred of doubt about the fact that theTagoe-Garcia fight is going to be a cracker as both boxers are formidablystrong and durable. But I’m very convinced that Tagoe would triumph after aferocious encounter. For me, it’s time for Tagoe to prove his mettle.

“I watched Tagoe in his last bout and I can attest tothe fact that he has improved tremendously. His ring artistry has changed andhe now carries a much heftier punch than previously. I believe withdetermination, hardwork, discipline and the right tactics in the ring, the GameBoy will emerge victorious,” he said.

The GBA Communications Director, nevertheless, described the23-year-old Garcia as a strong, shrewd and tricky boxer “whose talent inthe ring is enormous and cannot be taken for granted at all.”

“I have followed Garcia since his amateur days and Ican tell you emphatically that he would be a mouthful for Tagoe who is alsocapable of turning on the style to win on the night and get a shot at thetitle,” he added.

Winner of the Garcia-Tagoe fight could be in line for a shotat lineal/WBA/IBF/WBO lightweight king George Kambosos (20-0, 10KOs), laterthis year.

Tagoe’s last fight was in November 2020 when he defeatedAmerican Mason ‘Rock Hard Mighty’ Menard on points in a 10-round lightweightbout at the Seminole Hard Rock Hotel and Casino in Hollywood, USA.

Tagoe was stripped of his IBO title in June 2018 after hefailed to defend his belt against Fedor Papazov.

The Ghanaian had made a first defence of his title earlierin January after stopping Argentina’s Fernando Saucedo.