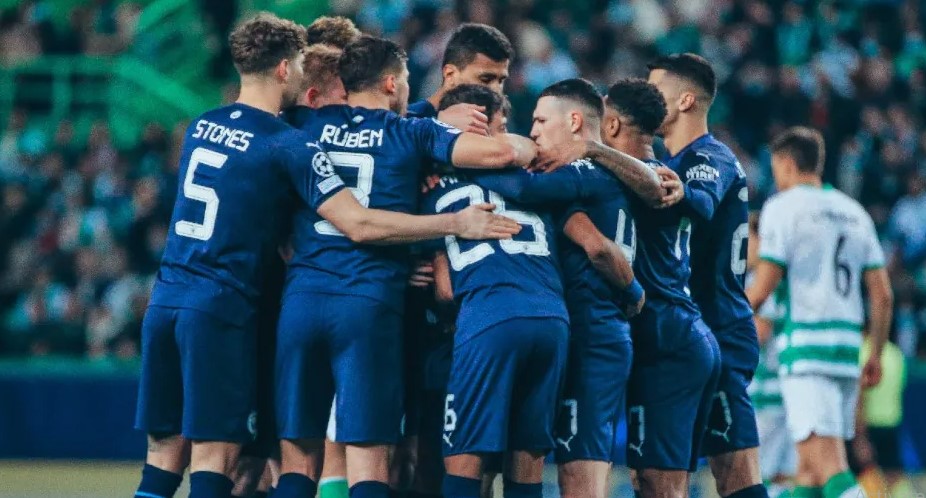 Manchester City ran riot in a 5-0 away thrashing of Portuguese side Sporting, with Bernardo Silva scoring twice as Pep Guardiola’s team all but sealed their place in the Champions League quarter-finals on Tuesday (February 15). The English champions were simply unstoppable as they tore apart their stunned hosts in the Jose Alvalade Stadium and the tie was as good as over by halftime.

Riyad Mahrez opened the scoring after seven minutes with a goal initially ruled out but allowed after a VAR check, before Silva almost broke the net with a stunning half-volley after 17 minutes to open his account. Mahrez then set up Phil Foden for a tap-in and Silva made it 4-0 just before halftime after being picked out by Raheem Sterling, with Sporting’s defence all at sea. There was no let-up after the break and former Benfica player Silva had a hat-trick goal ruled out for offside before Sterling made it 5-0 with a superb curler before the hour mark.

City could have added more to their tally on a night in which they made a huge statement in their bid to go one better than last season when they lost to Chelsea in the final.

“It’s a very good performance,” Silva said. “I honestly think in the first half we weren’t good enough to be 4-0 up. I’m Portuguese, I’m from the other side of the city. My mum is Sporting, my dad is Benfica. It was special to score here in my hometown. We still have a job to do in Manchester.”

Sporting were meant to give the Premier League leaders at least a test in the Portuguese capital, but right from the off, the hosts were no match for the City juggernaut. Kevin De Bruyne looked offside as he set up Mahrez for the opener, and City did not even celebrate as the linesman’s decision appeared clear cut, only for VAR to rule that the goal should stand.

The strike was the Algerian’s 10th in his last 11 Champions League appearances, and soon enough it was two as Silva hammered home off the underside of the crossbar. The defending from Sporting – playing their first Champions League last-16 tie in 13 years – left much to be desired as Foden poked home the third, unchallenged, before Silva’s second, via a deflection, caused more frustration on the Jose Alvalade terraces.

It was a matter of how many more City would get in the second half and Sterling scored the goal of the night, curling into the net from 25 metres for his 150th club career goal. The goal also ensured City became the 14th team to score 200 goals in the Champions League – with more surely to come as they continue to hit top gear, at home and abroad.

“I don’t think the team were nervous, it is just Manchester City are the best in the world, and they killed us every time they came into our box,” Sporting coach Ruben Amorim said. “The quality of the players and the manager was the difference.”