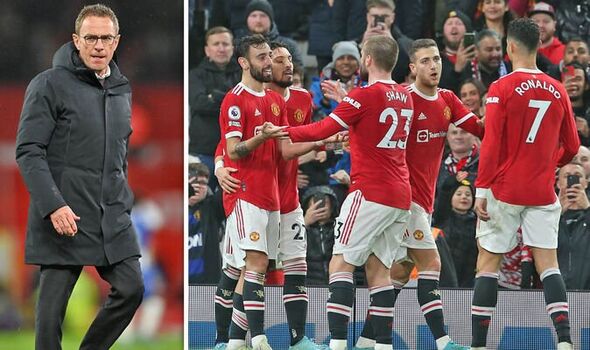 Manchester United interim manager Ralf Rangnick has had his say on the team’s 2-0 triumph over 10-man Brighton & Hove Albion at Old Trafford.

The Reds made the most of being involved in the only midweek Premier League game by earning three valuable points, thanks to goals from Cristiano Ronaldo and Bruno Fernandes, either side of Lewis Dunk’s red card.

This is what Ralf made of the game, when talking to MUTV and during his press conference afterwards.

“It felt better than the 35-40 minutes before that! Obviously, we should have killed the game off again, much earlier after the red card. We had five, six unbelievable chances to score, but, again, we didn’t and as long as it’s 1-0 and with the experience of the last three games – it’s normal that there is then a little bit of insecurity in the team. We were not quite lethal enough in those moments to kill the game off and it is always dangerous against 10 men. You can concede a goal. With Bruno’s goal, it was clear with only one minute to go that the game was over but it took very long before we put the game to bed.”

“Well, yes, it obvious in the first half that we had only two or three, maybe four turnovers and we were struggling to get hold of the ball and to take the ball away from them and, for us, it was – there were two alternatives. Either change formation to an unusual, in our view, 3-5-2, as our team hasn’t played in that formation that often, or mirror them in the 4-4-2 with a diamond. That again would have meant that one or two players would have played in not their best possible positions. So we decided to stick to the 4-2-3-1 and just take more risks, attack their centre-backs with our wingers on the ball side and it paid off because of the goal we scored. The first goal, it was a brilliant ball win by Scott McTominay and the red card was a perfect interception by Anthony Elanga and, from then on, it was a different game. We were in control of the game and, as I said, the only thing that I can fault the team for is that we didn’t score three or four goals.”

“I think Fred, in the second half, did well. Obviously with them being one player down, it was also important to keep control and possession of the ball and that is why I decided to bring on Paul [Pogba]. Since he was out for almost three months with a long-term injury, I think it was good to rest him in the first half and have him available for the last half-hour in today’s game.”

NERVES UNTIL THE CLINCHER

“Yes, of course. The memory of the last two games means again that’s normal. It’s a little bit like history repeats itself and, of course, you are a little bit nervous then in the last five minutes – that would have been the worst-case scenario if they had scored with one player down.”