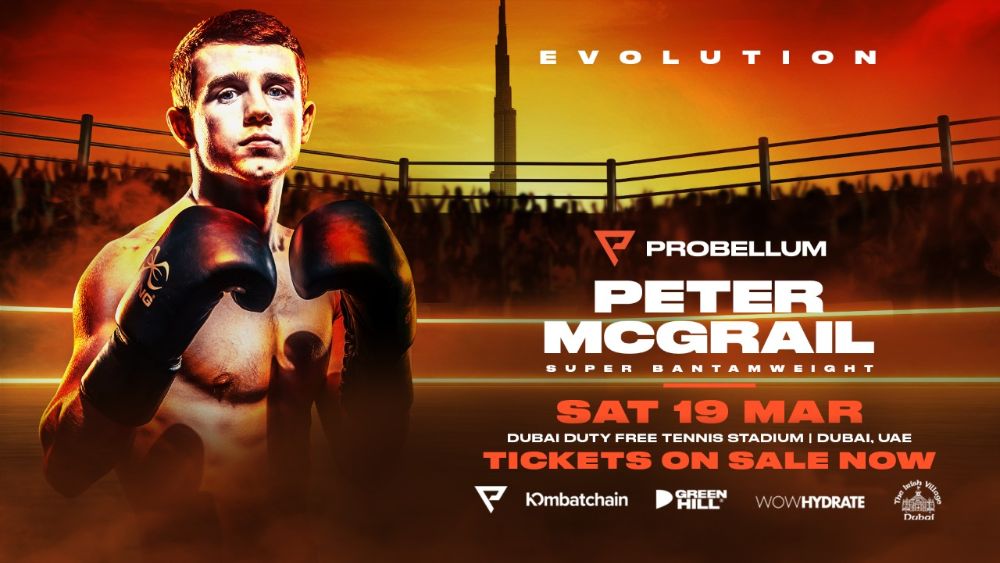 McGrail (2-0, 1 knockout), 25, recently signed to Probellum alongside his younger brother, 19-year-old Joe, and the skilful featherweight will be in action for the first time since late last year, when he competes on the second night of Probellum’s upcoming Dubai double-header, on Saturday, March 19.

Estelle Mossely will create history the night before when she headlines the Middle East’s first ever female world title fight before Sunny Edwards puts his IBF world flyweight title on the line a day later, as the Dubai Duty Free Tennis Stadium hosts a back-to-back boxing bonanza.

One of British boxing’s brightest young talents, Liverpool-born McGrail has enjoyed a strong start to his career in the professional ranks, beating compatriot Ed Harrison on his debut last October before defeating Nicaragua’s Engel Gomez in style, courtesy of a second-round knockout in December.

Prior to turning professional, his career at amateur level was hugely successful, with McGrail representing Team GB at the 2020 Tokyo Olympics, as well as winning gold medals at both the 2017 European Championships and 2018 Commonwealth Games. McGrail also took home bronze medals from the World Amateur Championships in 2017 and 2019, and is a seven-time national champion.

The Everton Football Club fan is widely considered the stand-out fighter of his generation to hail from the boxing hotbed of Liverpool and is being backed to follow in the footsteps of the city’s celebrated list of former world champions.

McGrail has already boxed to huge support and acclaim in this opening two pro bouts – which were both in his hometown – but is now determined to display his dazzling skills in Dubai next month.

“I’m really looking forward to competing as a Probellum fighter for the first time in Dubai,” said McGrail, who trains at the highly regarded Everton Red Triangle Boxing Club.

“This is Probellum’s first event of the year, featuring some brilliant fighters, and I’m absolutely delighted to be added to the card. I’ve never fought in the Middle East so it will be a great experience for me.

“The fight is just over a month away and my training camp has been going very well so far. I’m fully focused on being in the best possible condition to show what I can do when the event comes around and I hope the Brits in Dubai will come out to support me on the night.”

“We are very excited about Peter’s Probellum debut and we have full confidence he will produce a great performance,” added Richard Schaefer, President of Probellum.

“Peter is a fantastic talent, which is why we were so pleased to sign him. Performing at events such as Probellum Evolution will give him a platform to show his qualities on a global scale.

“He is the latest addition to what was already a brilliant card, and I would urge fight fans to secure their tickets as soon as possible in order to avoid disappointment. Probellum Evolution is going to be a massive, memorable occasion.”