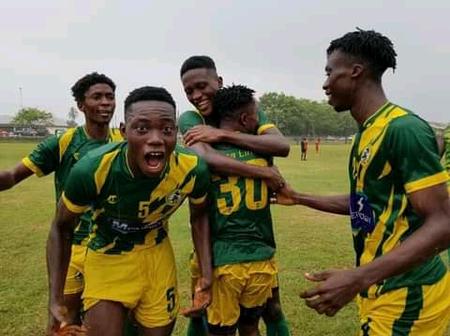 Tamale City Football Club won yet again to keep the pressure on leaders Nsoatreman in Zone One of the National Division One League.

The Tamale lads who have lost only once in their last five matches defeated Wamanafo Mighty Royals 4-2 at the Aliu Mahama stadium on Saturday to reduce the gap at the top to two as they moved to 30 points – two points behind leaders Nsoatreman who are on 32 points.

The Zones leading scorer Mohammed Yahaya scored a brace in between a Charles Junior opener and Isaac Yaro’s match winner to complete the rout as the visitors also netted through Shaibu Hamidu and Kofi Asante.

Tamale City have been one of the most consistent teams in the Zone having won nine, lost two and drawn 5 of the 14 matches played thus far.

League leaders Nsoatreman were held 1-1 by Berekum Arsenal – bringing to an end a four match winning run. Nsoatreman are the only side in the League yet to taste defeat but their winning run in this seasons League has been absolutely brilliant – after picking nine wins and 5 draws and going 14 matches without defeat.

In Wa – Wa Yassin and Wa Suntaa shared the spoils in their derby clash at the Malick Jabir Park.

Wa Yassin who are 5th in the table were tipped to beat their city rivals – rooted at the bottom of the table but both teams worked off their socks as they shared the spoils in a 1-1 draw on Sunday.

Korsah scored for Yassin before Ibrahim Baba equalised for Wa Suntaa to keep the result even.

Former Premier League campaigners B.A United pip Bolga All Stars 1-0 at the Sunyani Coronation Park with striker Adams Musah scoring the only goal of the match on Sunday.

Find the full results below: