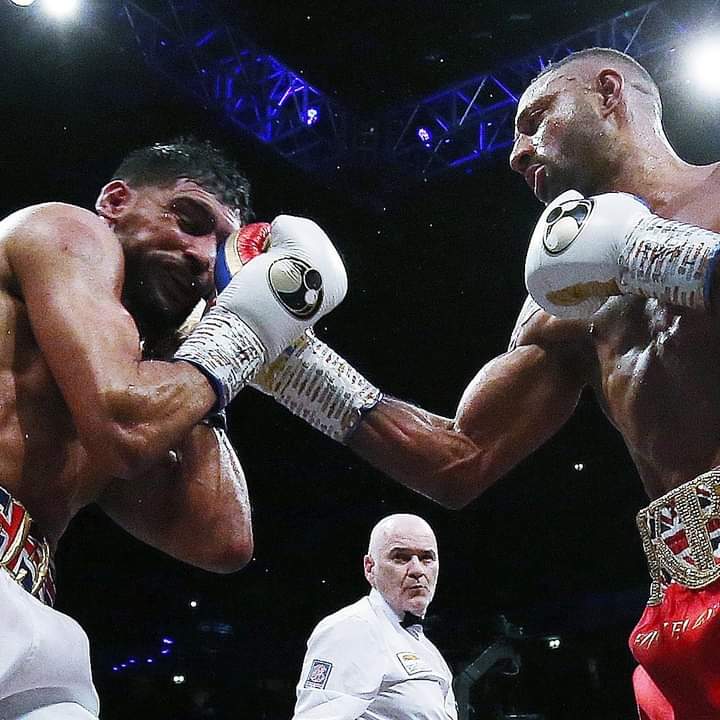 Twenty years since they first met in the ring as amateurs, and after more than a decade of simmering animosity between them, Kell Brook finally gained the sweet vindication he has craved for so long when he stopped Amir Khan in the sixth round on Saturday night in Manchester.

Brook reacted to his crushing victory with euphoria while Khan looked dazed and broken after he was helped to his corner.

The end, when it came, was as predictable as it was bleak for Khan. He protested meekly to the referee, Victor Loughlin, but he had suffered heavy punishment and, backed up helplessly against the ropes as Brook pummelled him, there could be only one outcome. One last uppercut, which followed percussive combinations, rocked Khan’s head back and, thankfully, Loughlin called a halt to the contest 51 seconds into round six.

Khan had come out fast and thrown some flashy combinations before the true pattern of the fight was established.

Brook nailed him with a stiff left hand which made Khan stagger backwards. Despite the shake of his head, it was clear that Khan had been hurt. They had to be separated at the bell but Brook had the look of a man who knew that he was about to dominate the rival he had despised for over a decade.

It seemed as if Brook hurt Khan every time he landed with real intent. Khan has always been an immensely brave fighter, however, and he fought back and tagged Brook occasionally with his fast hands. But Brook went downstairs to the body in the fourth round before, with calm deliberation, he began to really open up in the fifth. Khan tried to backpedal away but he could not stem the dark surge of trouble that finally engulfed him. It was a relief when it was all over.

Their grudge match had always been bitterly personal to Brook who believed Khan had continually ignored or disrespected him. “Kell’s always been very obsessed with my career, like a fanboy,” Khan said this week. “I’ve been living in his head for such a long time.” He then fuelled the acrimony by saying: “I’m worried about Kell’s health after the beating I’m giving him.”

Brook brutally exposed the hubris of Khan. His pleasure in almost certainly ending the career of the man who had been his nemesis for so long will be deep and sustained for Brook has long harboured an intense dislike of Khan. The only danger for Brook is that he will believe overwhelming a faded Khan is a sign that he should campaign again at a far higher level against much younger and far more threatening men. Brook has suffered three crushing defeats over the years and this immensely satisfying win cannot obscure the damage he suffered against far superior fighters in Gennady Golovkin, Errol Spence and Terence Crawford – who stopped him in his previous fight. It would be an uplifting end to the Sheffield fighter’s near 17 years in the professional ring if he could walk away with his health intact at the age of 35.

Khan is also 35 and, before he stepped into the ring against Brook, he had said: “If either of us lose, it’s something that will haunt us for a very long time. That’s the reason I’ve trained so hard. I’ve done everything I’ve needed to because I know I can’t lose this fight.”

Boxing is a harsh and unforgiving business and so Khan’s bold words were swept aside by the concussive fists of his fierce rival. He will have to learn how to overcome the haunting memories of this painful defeat. It would help if their grudge could be buried now for both men should look to a life beyond the boxing.

Khan showed as much courage outside the ring when, long past midnight, he joined Brook for a shared press conference. It took heart and class for him to congratulate Brook. Speaking in a low voice, but with wit and insight, he admitted that he will talk to his family about his future. Khan insisted that he was still glad to have fought in the most electric atmosphere either he or Brook had ever experienced.

Brook also praised Khan and showed similar respect in a heartening antidote to all the previous vehemence. Before they parted they wrapped their arms around each other’s shoulders and posed for one last photograph.

Of course, Brook will almost certainly box on and said recently that he would like to fight Conor Benn next. The son of Nigel Benn is 10 years younger than Brook and he would bring the violent danger to the ring that is now beyond Khan. So, for a while at least, Brook should savour his victory over Khan because this was one of the most glorious nights of his boxing life.

In the main preliminary bout, Natasha Jonas, who is 37, finally won the world title which she has pursued for so long. She had to move up three weight divisions but she boxed with commanding authority to stop Chris Namus, from Uruguay, in the second round to become the new WBO super-welterweight champion. Jonas unleashed a bludgeoning series of combinations to knock down her hapless opponent in the first round. Namus was fortunate to hear the bell but, within 28 seconds of round two, she was sent crashing to the canvas again before the referee brought the one-sided contest to a merciful end.

Nine months ago, Jonas fought with grit and skill to nearly beat Katie Taylor, the undisputed lightweight champion who is ranked as the best female fighter in the world. Her admirable performance meant it became even more difficult for Jonas to find meaningful bouts as so many prospective opponents were wary of her. But her desperation to win a world title at the third attempt was fulfilled at last against Namus – who stepped in as a late replacement to fight for the WBO’s vacant championship just eight days ago. An ecstatic Jonas, understandably, did not care about the dubious calibre of Namus as she celebrated her victory with moving emotion.