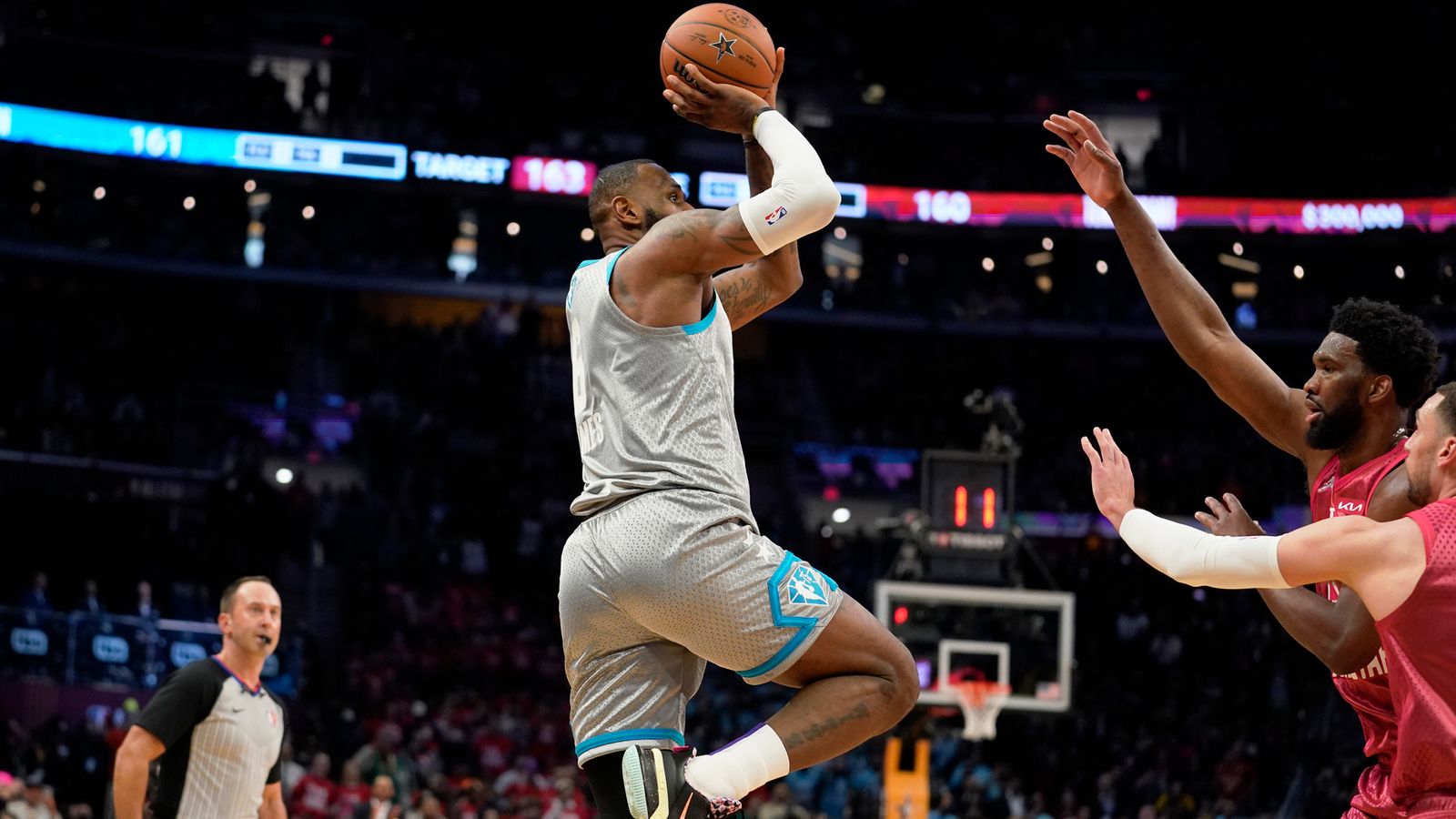 t’s not easy to carry the weight of an entire league on your shoulders.

Much less so for nearly two decades, but that is what LeBron James has done.

He’s done it willingly, selflessly, thanklessly and without any reward other than that which his greatness – borne of scarcely believable levels of discipline and work ethic – affords him to achieve.

James, though, is far from the first to carry the torch for the entire NBA. He has done it up until now, as Michael Jordan did before him and as Magic Johnson and Larry Bird did before him, etc, etc.

It was fitting that LeBron should deliver yet another moment for the scrapbook on a night where the rest of the legends mentioned were also in Rocket Mortgage FieldHouse as the NBA honoured its 75th Anniversary team.

But what does being the ‘face of the league’ mean to James?

“Responsibility for sure,” said James. “Somebody did it for me, put it in a position where I made sure it was my responsibility to make sure I kept it where was, and make it even more ingrained, and represent this league with the utmost respect.

“[It’s important for me to] not only play the game the right way, but also mean something off the floor as well, because there are so many generations that look for inspiration and it’s always pretty cool to see the guys who come into our league and say their favourite player growing up was LeBron James. That means something to me because it feels like that has [to do with] so much more to do than just playing the game of basketball.

“I hope it was also how I inspired off the floor. How to keep the narrative of keeping your friends around and them being able to work the room without my presence. Being able to give back to your community in a way that you feel passionate about it.

“It’s a lot of responsibility and I’ll continue to do it until I’m done playing the game and it’ll fall in the hands of the next one.”

One of the most likely candidates to pick up the mantle when LeBron eventually decides to bow out – likely to be after playing a season with his son Bronny, who will be eligible for the NBA draft in 2024 when his father will be 39 – is Stephen Curry.

Stephen Curry demolished the record for the most three-pointers in the NBA All-Star game with 16 made as he took over the game, dropping 50 points

The Golden State Warriors guard has long been considered the best shooter of all-time and he officially took Ray Allen’s record of 3-pointers made towards the end of last year.

Curry blitzed his way to winning the Kobe Bryant MVP Trophy in Cleveland on Sunday night, hitting a record 16 3-pointers on his way to 50 points.

James said: “Steph, I mean, come on man, this guy is from a different planet! He has an automatic sniper connected to his arm and when he lets it go, not only himself, but everybody on the floor, in the stands, on TV, on their phones, whatever you’re watching on, they think it’s going in every time.

“Nine times out of 10, sometimes 10 times out of 10, it does. So, to be out there and watch that kid from Akron (Curry is a fellow Ohio native, alongside LeBron) as well, shoot the ball the way he shot it, was unbelievable.”

One of the most joyful moments on a night full of them for the four-time NBA Champion and four-time league MVP, was when he got the chance to share an embrace with Jordan.

The Chicago Bulls legend nearly brought the house down when he was the final name announced during the honorary NBA 75 celebration at half-time.

Even though he and James have not enjoyed an overly close relationship over the years, perhaps due to the fire of competition which burns so deeply at their respective cores, there was a genuine warmth to their embrace during the half-time festivities.

Somewhat poetically, the fadeaway jumper from James which won the game for Team LeBron ensuring a triumphant return to Cleveland, was inspired by the man he had earlier shared a hug with.

James added: “I did not want to lose the opportunity to shake the man’s hand that inspired me throughout my childhood. I haven’t had much dialogue with him in 19 years in this business, but part of me wouldn’t be here without MJ’s inspiration.

“I always wanted to be like him growing up. It’s crazy that the game-winning shot tonight was a fadeaway, and it was inspired by MJ.