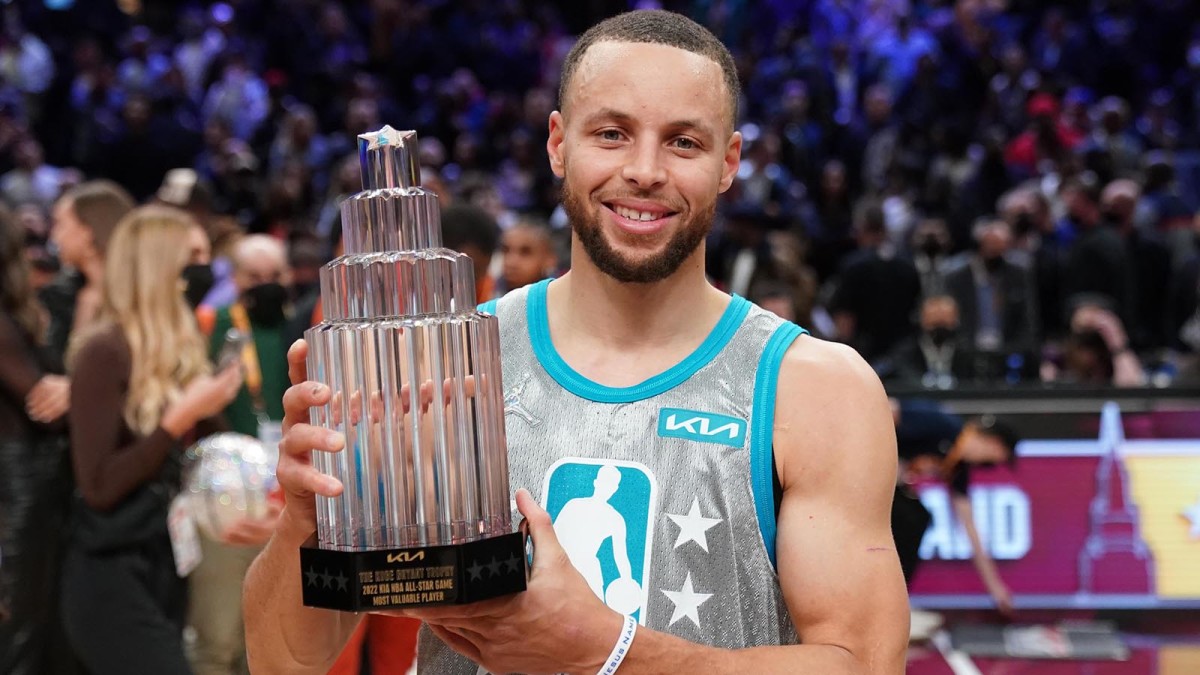 The two kids from Akron stole the show at Sunday night’s All-Star Game.

Stephen Curry put on a shooting clinic all evening, hitting 16 3-pointers and scoring 50 points, while LeBron James hit an absurd, one-legged turnaround jumper to clinch the victory for Team LeBron over Team Durant 163-160.

On a night when the NBA honored its 75 greatest players, two of them — Curry and James — put on displays worthy of the occasion.

“Yeah, I told him on the court after the game it was kind of a perfect ending,” said Curry, who was named the game’s Most Valuable Player. “I was chasing that extra two or three points. I think DeMar [DeRozan] hit a big shot, and then [James] came out and hit the game winner.

“It was kind of a perfect ending. Obviously, I got the MVP; I played well the whole night. He hit the game winner. All the history of our series and the Akron ties, and all that kind of going into how the night went, so it was pretty — can’t really draw it up any other way.

“It’s right on the nose of how it should go.”

Curry, who set the NBA’s all-time record for 3-pointers made earlier this season, hit an absurd 16 3-pointers — which would be the most in any game in NBA history, and smashed the prior All-Star Game record of nine. After setting the first-half record with eight triples, Curry brought the crowd — which had loudly booed the Golden State Warriors star before the game — to its feet when he nailed five straight 3-pointers early in the third quarter, including one on three straight possessions.

He then hit his 15th 3 — more than anyone has ever made in any NBA game — at the end of a passing sequence that saw him pass it to James, who threw it to Nikola Jokic, who passed to Giannis Antetokounmpo, who then swung it to Curry in the corner. Curry then let it fly, and he fully turned around to celebrate before the ball softly fell through the net.

During the next timeout, Curry said into the microphone he was wearing for TNT, “Can someone tell me what the record is for points?”

Ultimately, Curry wound up with “only” 50 points — missing a couple of 3-pointers in the fourth quarter that would’ve allowed him to surpass the 52 points Anthony Davis scored to set the record in 2017 — before James ended the contest with his dagger over Zach LaVine.

“I couldn’t have dreamt it,” James said of hitting the game winner. “I could not have dreamed of that moment any better than the actuality that just happened. For me to be back here, like I keep stating, 35 minutes [north] of where I grew up here in Akron, Ohio, to hit the game winner in the All-Star Game where me and my guys back in the back, we used to watch the All-Star Game. I remember 25 years ago we were 12, 11, wishing that we had the opportunity or the means to come up to Cleveland and see some of the greatest basketball players of all time because they inspired us so much.

“For me to be here today, for my best friends to be here, for my wife and my kids and my family, my mom. There are so many people that seen me grow from really a young toddler to who I am today. I couldn’t even — I couldn’t picture that moment any better.”

The exploits of James and Curry — as well as Antetokounmpo, who was the only player on either team playing any sort of defense for large stretches of the evening — came along with taking part in the NBA’s 75th anniversary celebration, as the league honored the 75 greatest players in its history. A large group picture of those who were in attendance was taken inside the arena before the game began.

They were then honored during halftime with a ceremony that was emceed by Oscar-winning director Spike Lee, included a video narrated by Oscar-winning actor Forest Whitaker and then saw every player honored by position — beginning with forwards, followed by centers and ending with guards. The last player announced was Michael Jordan, who drew the biggest cheer of the night.

“To be a part of the 75 greatest basketball players to ever play, it just takes me back to my childhood once again growing up in Spring Hill and having all my inspirations taped on my wall, Allen Iverson and Jason Kidd, Gary Payton, Michael Jordan, Magic Johnson, Oscar Robertson,” James said. “To see those guys today and then be on stage with those guys it is … you guys don’t understand.

“I’m trying to make you understand as much as I can, but it’s just crazy.”

The game itself used the format first introduced at the All-Star Game in Chicago two years ago, the Elam Ending, which brought the same level of intensity and competition to the final moments this year that it did in its debut.

After the two teams played each of the first three quarters for charity — with the winner of each individual quarter earning $100,000 for its respective charity (Team LeBron playing for Kent State’s I Promise Scholars Program and Team Durant playing for the Greater Cleveland Food Bank) — the fourth quarter was played to a target score.

During introductions, it came as no surprise that James received a massive ovation from the fans he has played in front of for 11 of his 18-plus NBA seasons — letting out a massive roar and raising his arms to the crowd as they did so.

It was equally expected that the two Golden State stars honored Sunday night — Curry, who did play, and Draymond Green, who did not — were roundly booed after playing James and the Cleveland Cavaliers four straight years in the NBA Finals, from 2015 to 2018, winning three of them.

Team LeBron won the first quarter 47-45, thanks to Luka Doncic scoring the team’s final six points. Team Durant came back and won the second quarter 49-46 — despite a record-setting eight first-half 3-pointers from Curry — to take a 94-93 halftime lead. The two teams then tied in the third quarter, thanks to a heady defensive play by Antetokounmpo late in the quarter.

That left the score at 139-138 in favor of Team Durant heading into the fourth, meaning that the target score was 163 points — 24 more than the total from the team leading after three, in a nod to the late Kobe Bryant, and setting up James’ final heroics after Joel Embiid and Antetokounmpo traded baskets throughout the fourth quarter.

“I was just trying to win,” Antetokounmpo said. “I’m really competitive. Kind of the All-Star Games, they are not built for me. Obviously, I come out here and try to enjoy the game as much as possible, but I don’t know how not to go hard. I kind of feel terrible when I’m walking around because I always try to go full speed no matter what I do because that’s how — what type of player I am.”

For the second straight year, Team Durant was without its captain, as Kevin Durant was unable to play in Sunday’s game due to the MCL sprain that has sidelined him for the past month. Durant was originally scheduled to attend the game, despite his injury, but did not after the death of his grandmother this weekend. Green (back, calf) and James Harden (hamstring) also missed the game due to injury, with LaMelo Ball, Dejounte Murray and Jarrett Allen, respectively, being tapped to serve as their replacements.

Donovan Mitchell announced just a couple of hours before tip on Sunday that he too wouldn’t play, due to an upper respiratory illness that kept him from participating in anything on Saturday and, ultimately, the All-Star Game itself. Chris Paul, meanwhile, will miss the next six to eight weeks, at least, after suffering an avulsion fracture in his right thumb in Wednesday’s win over the Houston Rockets. And yet despite that injury, Paul played for a little more than two minutes in the first quarter of Sunday’s game, missing his only shot (a left-handed layup) before sitting down for the night.

Team LeBron improved to 5-0 since the NBA went away from the traditional East-West format of the All-Star Game in 2018 and instead adopted the current setup of having the top vote-getter from each conference draft teams from the game’s remaining 22 participants.