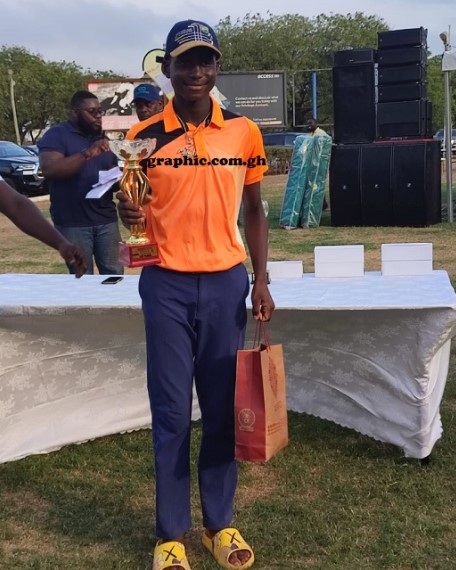 Fourteen-year-old golf prodigy Michael Nyarko recorded a seven-under-par 64 to win the first qualifier of the second edition of the Heritage World Cup last Saturday at the Celebrity Golf Course, Sakumono.

The youngster who was playing off handicap 13 also stole an early march on his rivals with 43 Stableford points for the much-coveted all-expenses-paid trip to join other competitors from 30 other countries to play for the ultimate trophy from July 4 to 9, 2022, in Mauritius.

Nyarko was trailed on the men’s amateur Division 1 leaderboard by Enoch Akabuudi who played a six-under-par 65 and Francis Andoh who recorded a three-under 68.

In an interview after receiving his trophy, the youngster said coping with the pressure and a windy course was the secret to his victory.

He also disclosed that he had been playing golf for close to a decade and was hopeful of turning professional in future.

For his price, Nyarko won a trophy and a Dubai ticket from Emirates Airlines.

The men’s Division 2 title was won by Nana Kofi Asare with a three-under 68 with Yi Wang (71) and James Otoo (72) finishing second and third respectively.

The women’s Division 1 trophy was won by Grace Afriyie while Hawa Brito won the Division 2 trophy.