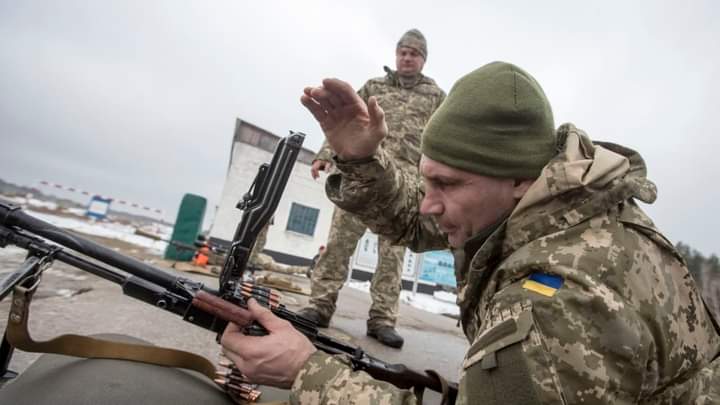 Legendary boxers and brothers Vitali and Wladimir Klitschko have vowed to fight for Ukraine amidst the ongoing Russian invasion.

The former heavyweight champions, with Vitali now the mayor of Kyiv, have sent out an emotional plea to end the ‘senseless war’ as their country continues to be attacked by Vladimir Putin.

As mayor of the Ukraine capital, Vitali has declared an emergency for the Ukrainian capital, which is now under martial law.

The pair released a joint video message in Russian, Ukrainian and English on Thursday.

In the video, Wladimir Klitschko said:  ‘I’m calling to all international partners to observe this tragedy that is happening nowadays in Ukraine.

‘And this senseless war that is not going to have any winners, but losers.

‘I just want to tell you we must stay united against this aggression, against Russian aggression.

‘Don’t let it continue happening in Ukraine, don’t let it happen in Europe and eventually in the world.

‘United we are strong, support Ukraine, thank you.’

Vitali Klitschko became mayor in 2014, as well as head of the Kyiv City State Administration

In a LinkedIn article expressing his feeling on the conflict, Wladimir said: ‘Now, the Russian president is using war rhetoric in the purest Bolshevik tradition and is rewriting history to justify his redivision of borders.

‘He makes it clear that he wants to destroy the Ukrainian state and the sovereignty of its people. Words are followed by missiles and tanks. Destruction and death come upon us. That’s it, blood will mix with tears.’

Wladimir continued: ‘We must face reality and have the courage to draw the conclusions for our future and that of our children. This is a blatant violation of international law. And, if you listen carefully, this war is also talking about Europe.’

The former heavyweight world champion urged those who have stayed in Ukraine to act against the invasion.

Wladimir wrote: ‘We will defend ourselves with all our might and fight for freedom and democracy. You can also act. Let not fear seize us; let’s not remain frozen. Putin shoots at Ukrainian cities, but he aims at our hearts and, more importantly, at our minds. He wants to create doubt and confusion and thus inaction.’

Amidst the ongoing invasion, the Ukrainian border agency have banned men between age of 18 and 60 leaving the country. The agency says the measure is aimed at ‘guaranteeing Ukraine’s defence and the organisation of timely mobilisation.’

The temporary ban will remain in force for the duration of martial law declared on Thursday morning.

Ukrainian President Volodymyr Zelensky has just signed a decree ordering a general mobilisation. All Ukrainians who can carry arms have been urged to defend their homeland.

The country’s conscripts and reservists are also being called up, according to the decree, which is to be in effect for 90 days.

Vitali Klitschko became mayor in 2014, as well as head of the Kyiv City State Administration.

His brother Wladimir enlisted in Ukraine’s reserve army in Kyiv earlier this month as the country braced for an attack.