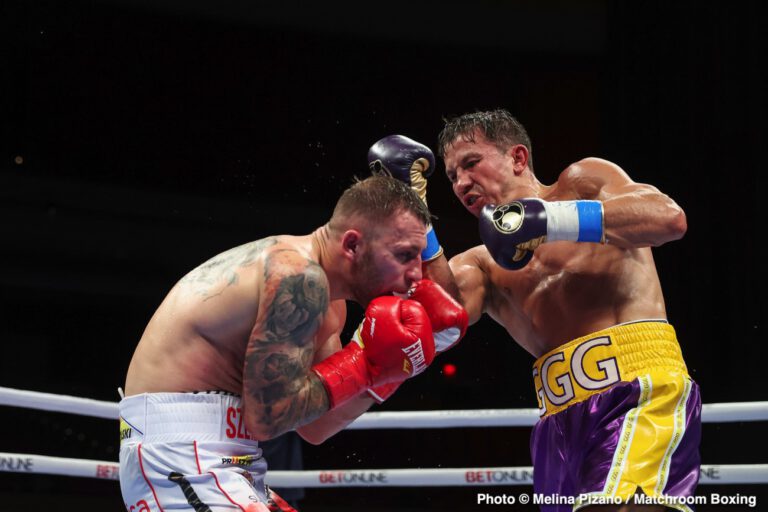 ESPN is reporting the Golovkin-Murata fight is official for April 9th in Murata’s home country of Japan. It’ll be a must-win fight for Golovkin, who turns 40-years-old a day before the battle on April 8th.

If GGG doesn’t get this thing out of the way now, he’ll miss out on a lucrative trilogy fight with Canelo Alvarez on September 17th. Canelo needs to beat Dmitry Bivol on May 7th to fight Golovkin in September. If Canelo loses to Bivol,  those two will likely fight a rematch in September, provided he doesn’t get beaten too badly.

With Canelo, you don’t know whether he can handle a technical fighter like Bivol without being given another controversial decision. The Mexican star’s work rate is like a played oil, only producing a trickle of shots and can be outworked by Bivol.

However, the fight is believed to be taking place at the T-Mobile Arena in Las Vegas, the same venue where the Mexican star dodged defeats against Golovkin twice and Erislandy Lara.

Given what Golovkin stands to lose if he gets beaten by Murata, it might have been better for him to scrap the fight or delay it until after the trilogy match with Canelo.

There likely wouldn’t have been any complaints from fans if Golovkin scheduled the Murata fight for early 2023 rather than April because he can’t afford to lose to the Japanese fighter.

It’s going to be risky for Golovkin because he will be facing Murata in his home country of Japan, likely in front of a massive crowd in Saitama.

Unless Golovkin scores a knockout, he’s going to get outworked by Murata, and that’s going to put him in danger of losing a decision.

While Murata is arguably the weakest link among the champions at 160, he’s got heavy hands, and he’s capable of throwing many punches.

Golovkin struggles against fighters who throw many punches, as we saw in his fights with Sergiy Derevyanchenko and Kassim Ouma.

Murata can throw as many punches if not more, than those fighters did against Golovkin and potentially beat him by a decision.

The 2012 Olympic gold medalist Murata lost to Hassan N’Dam and Rob Brant in 2017 and 2018. Murata later avenged both defeats, but it’s telling that fighters at that level beat him.

Murata has good skills, but he’s not a major talent by any means, and you can argue the only reason he’s the WBA 160-lb champion is that he beat N’Dam.

If Murata had to win a middleweight title against Jermall Charlo, Demetrius Andrade, GGG, Chris Eubank Jr, Erislandy Lara, Jaime Munguia, Sergiy Derevyanchenko, or Zhanibek Alimkhanuly. In that case, he’d be out of luck.

Golovkin will get a good payday fighting Murata, but it’s not a great fight on paper for the fans. It’s troubling that Golovkin was willing to invest so much time in getting the fight with Murata done.

All the time that Golovkin spent trying to get his fight with Murata out of the way, he could have fought three times and likely made a lot more money.

When you see Golovkin willing to put so much time into a fight that doesn’t resonate with U.S boxing fans like the Murata clash, it makes you wonder whether GGG is just looking to cash out and not interested in fighting the talented fighters, aside from Canelo for apparent reasons.

“The Gennadiy Golovkin – Ryota Murata middleweight title unification is set for April 9 in Saitama, Japan on DAZN. If GGG wins and Canelo Alvarez defeats Dmitriy Bivol on May 7, they’ll meet in a trilogy bout for the undisputed super middleweight title on Sept. 17,” said @MikeCoppinger.

“The bout will be broadcast in prime time in Japan on Saturday, which means a morning telecast in the U.S. Japan is 14 hours ahead of the East coast so expect, perhaps, an 8/9 a.m. ET start time for the main event.”