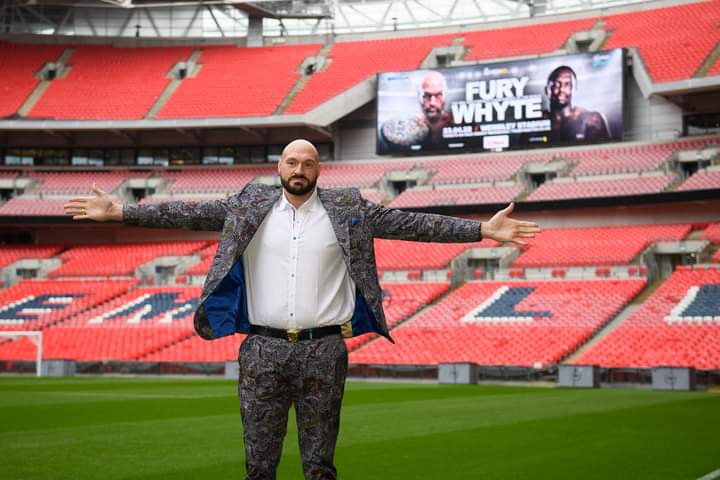 Two men will fight, but only one showed up for the press conference. WBC/Lineal/Ring Magazine heavyweight champion Tyson “The Gypsy King” Fury made it a solo act Tuesday to promote his April 23 showdown against Dillian Whyteat London’s Wembley Stadium connected by EE. Fury-Whyte will be broadcast live on Pay-Per-View in the U.S.

Fury (31-0-1, 22 KOs) has been the lineal champion since November 2015 and will fight on English soil for the first time since June 2018. Since then, he’s fought Deontay Wilder three times, cemented his status as the world’s best heavyweight, and has served as an inspiration for mental health sufferers around the world. Whyte (28-2, 19 KOs) is a consensus top-five heavyweight who knocked out Alexander Povetkin in a rematch last year to regain the WBC interim title.

Fury-Whyte marks the third time in boxing history that a pair of Brits are fighting for the heavyweight title. Fury managed without his counterpart at the press conference, lobbing insults and promising a memorable evening in front of an expected crowd of nearly 100,000.

Promoted by Frank Warren’s Queensberry Promotions and Top Rank, tickets will be on sale exclusively from Ticketmaster at 12 p.m. UK/7 a.m. ET on Wednesday, March 2. News on undercard bouts will be announced shortly.

This is what Fury, Warren and Top Rank COO Brad Jacobs had to say at Tuesday’s press conference.

“It’s been a roller coaster of a ride, across the Atlantic Ocean in the exotic venues of MGM Grand, T-Mobile, Staples Center. I just feel like the song {by} Thin Lizzy, ‘The Boys Are Back in Town.’ Four years away, and I get to come back and showcase on the world’s biggest stage at Wembley Stadium, 100,000 people there. I’m just putting it on so the fans can come, the people who traveled to Las Vegas… not everyone was able to come. For the people who stayed up to five in the morning to see those fights on BT Sport, now they can come and enjoy an event on home soil and be a part of history. People will be talking about this event and saying, ‘Where were you when this happened?’”

“I know Dillian Whyte is going to come in prepared. He’s going to come in rugged and rough and game and aggressive. And he’s got a big left hook and a big right hand. Who knows? It could be me chinned on the night. I think both fighters are going for the knockout on the night. I just think when I land a ‘Lancaster Bomber’ on his jaw, it’s going to be over. That could be in round one, or it could be in round six. I don’t see it going past that. I’m looking to put on an excellent {fight} and showcase knockout boxing for the UK fans and then sing a load of songs afterwards and have a good time. Party on down in the big smoke!’”

“This man is a big old strong fellow who swings a big old punch in and knocks a man spark out if he connects. But if I’m daft enough to get hit off him and knocked out, then I don’t deserve to be heavyweight world champion.”

“I don’t blame him for not being here today because if he were here, I’d have probably stretched him at the press conference. It’s good he’s not here, otherwise I’d be remanded in a London jail cell somewhere. The buildup to this fight will be fantastic because Tyson Fury versus his own shadow sells for sure. I will make sure people are entertained.”

“My personal message to Dillian Whyte today is this: I will win this fight for England and for St. George on St. George’s Day. There we go.”

“He should be here promoting the fight. That’s my opinion, and I think it’s tough luck for him and his family and his legacy going forward.”

“I’m delighted. It’s great. We’re at Wembley. I think we’re going to sell out just under 100,000 capacity. It’s going to be a special night because you have the lineal champion, the WBC champion who has not been here for four years, not fought in the country for four years.”

“The atmosphere is going to be brilliant. All we need — unfortunately he is not here today — is the other side of the card to show up.”

“Whyte is certainly a credible threat and is one of the top available contenders. It is unprofessional that he is not here today but we will get past that and move on. Everyone is second best to Tyson, in the ring, in personality, in everything.”