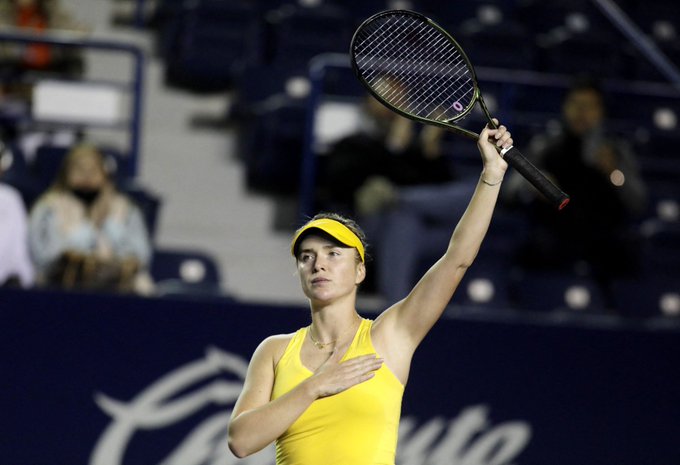 Ukraine’s Elina Svitolina thrashed Russian Anastasia Potapova in Mexico on Tuesday, deciding she could do more for her country by playing than boycotting the match.

Svitolina had initially refused to play her opening match against Potapova at the Monterrey Open, but went ahead after tennis authorities decided to ban Russian and Belarusian players from competing under the name and flag of their countries.

“Today it was a very special match for me,” the 27-year-old Svitolina said. “I’m in a very sad mood, but I’m happy that I’m playing tennis here.

“I was focused. I was on a mission for my country. From the beginning, it was important to be ready for anything that comes my way.”

The former world No 3, who played dressed in Ukraine’s blue and gold colours, added: “I think it’s my mission to unite our tennis community to stand with Ukraine, to help Ukraine because what we’re going through is a horrible thing for all Ukrainians.

“That’s why I’m here. That’s why I’m playing for my country and doing my best using my platform and using my resources to introduce that and try to invite people to support Ukraine.”

Svitolina, who has said she would donate her prize money from the tournament to the Ukrainian army, defeated Potapova 6-2 6-1, thumping her chest repeatedly on court.

The players exchanged a few words at the net after the match before Svitolina showed her appreciation for the support from the crowd, while television graphics had a blank space next to where Potapova’s flag and country would normally have been.

“For me, playing the match here, I’m not playing only for myself,” said Svitolina. “I’m playing for my country, I’m playing for the help of the Ukrainian army and people in need. Every victory that I’m going to get is going to be very special.”

Yastremska: I won for my country

In Lyon, fellow Ukrainian Dayana Yastremska collapsed in a heap on court after her victory over Romanian Ana Bogdan at the WTA 250 tournament.

The 21-year-old and her younger sister had spent two nights in an underground car park last week before their parents sent them out of Ukraine by boat to Romania and then safely to France.

“My heart stays at home, and my mind is fighting here, so it’s very difficult to find the concentration, to find the balance.

“This win, compared to what’s going on in my country, is nothing. But I’m happy, at least, I’m also fighting for my country. I’m really proud of the Ukrainians and they’re really heroes. I hope everything is going to finish soon.”