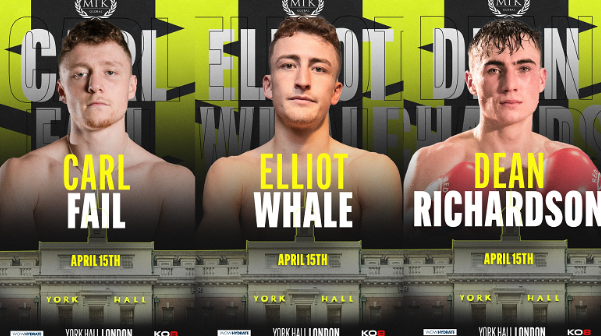 Even more undefeated stars have been added to next month’s #MTKFightNight event – with Carl Fail, Elliot Whale and Dean Richardson all returning on the bill.

The card is headlined by a British and Commonwealth lightweight title fight between Gavin Gwynne and Luke Willis and takes place on April 15 at York Hall in London, which will be broadcast live in the US on ESPN+ in association with Top Rank, and worldwide on IFL TV.

Fail (5-0, 2 KOs) makes a speedy return after kicking off 2022 with a dominant victory last week, after also claiming four impressive wins in 2021.

Whale (5-0, 1 KO) was last in the ring in December when he defeated Miroslav Serban on points, going alongside his win over previously undefeated Jamie Stewart back in February 2021.

Former Southern Area super-welterweight champion Richardson (12-0, 9 KOs) makes his long-awaited comeback too, as he competes for the first time since March 2020.

“Carl Fail is destined for big things and has carried his success from the amateurs into the professionals, so we’re glad to have him on the card. Elliot Whale is another who is touted to achieve a lot so we can’t wait to see him step through the ropes again.

“It’s fantastic to have Dean Richardson finally return after over two years out too, so it looks set to be yet another stacked show.”

Elsewhere on the event on April 15, Sam Gilley defends his English super-welterweight title against Drew Brown, Nina Hughes takes on Bec Connolly, plus Pierce O’Leary, Sultan Zaurbek and Jimmy Croxson are in action.