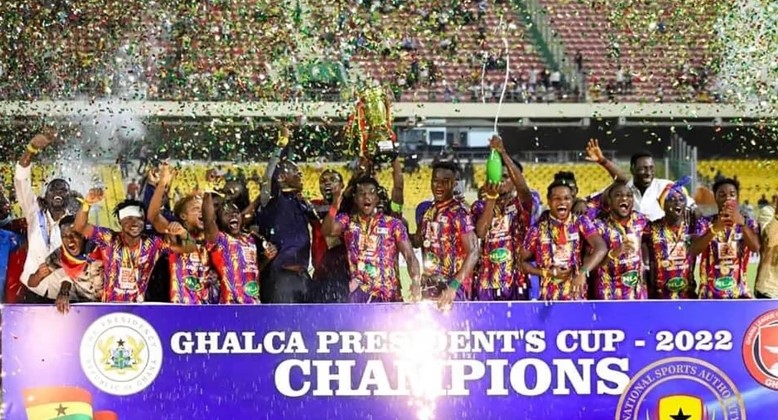 Hearts of Oak have won the 2022 GHALCA President’s Cup after beating rivals Asante Kotoko 2-1 at the Accra Sports Stadium.

Goals from Daniel Afriyie Barnieh and substitute Patrick Razak saw the Phobians emerge victorious in what was a cagey encounter, ensuring Samuel Boateng’s strike was only good enough for a consolation.

Samuel Boadu’s side was largely dominant, with the midfield paring of Sulley Muntari, Abdul-Aziz Nurudeen and Salim Adam proving superior to Kotoko’s.

While Hearts enjoyed the larger share of possession, it was Kotoko to had the first opening, Franck Mbella firing his shot into the side net.

Hearts’ best chances in the first half came from Muntari, who tested goalkeeper Danlad Ibrahim twice, first from a long-range shot and then from a free-kick.

The game finally sprung into life six minutes into the second half when Afriyie Barnieh broke the deadlock with a low shot.

The Porcupine Warriors thought they had equalised in the 59th minute when Etouga headed the ball into the net, but the goal was ruled out for offside.

After upping their game and knocking on Hearts’ door, Prosper Narteh Ogun’s side restored parity through substitute Samuel Boateng, whose shot ended at the back of the net after ricocheting off Mohammed Alhassan.

The game looked destined to go into extra time, but a blistering counter-attacking move from the Phobians presented Patrick Razak in a one-on-one chance.

The pacey winger ran over 35 yards across the pitch before dribbling past a hapless Danlad to score the winner to hand Hearts the President’s Cup.