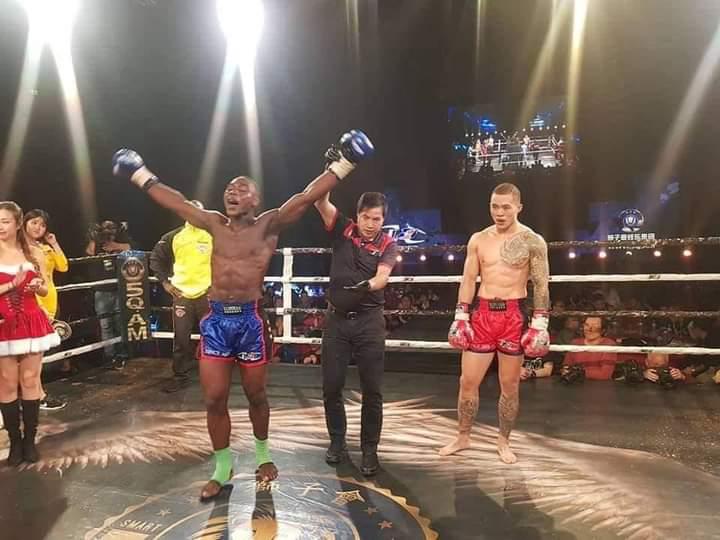 Ghanaian light heavyweight kickboxer, Jonathan Bafawuse Euro remains focused on training ahead of a kickboxing fight against Arnold Allen of the UK in London on March 25, according to sources close to the organisers.

Euro, a former WKF light heavyweight champion says the chance to announce himself on the international scene is one he is keen to grab after learning of talks between his management and the Wimbledon Kickboxing and Boxing Club to also feature on the mega fight bill scheduled for the end of this month.

Jonathan Euro has won multiple titles in his kickboxing career

Another Ghanaian, Stephen  ‘Torado’ Bruce is already confirmed to face another Briton, Aaron McGahey on the same show in London and Euro can’t wait to also showcase his talents come fight night.

“I was so excited when I heard the news that I’m going to fight in the UK, although it is not yet confirmed I trust my management to make it happen and I promise I won’t let them down because I will do everything to win,” Jonathan Euro told journalists after a training session in Accra.

Jonathan Hero with a trademark celebration

“No matter what happens, I am not relenting in my training. It’s the same focus, same determination and same attitude to be the best in whatever I do. Whenever the opportunity comes I will be ready because I was born ready,” the highly rated fighter affirmed.

Meanwhile Euro, also a former GFC champion is looking beyond the possibility of fighting Arnold Allen in the UK and hoping more such competitions can be held locally to keep the top kickboxers in shape.

“I just hope our officials will organise more tournaments for us to test ourselves locally because we have a lot of good fighters all ready to make the country proud if given the opportunity,” he said.

“It’s good for us to keep in shape and be ready to properly defend the flag of Ghana in international championships,” Euro added.