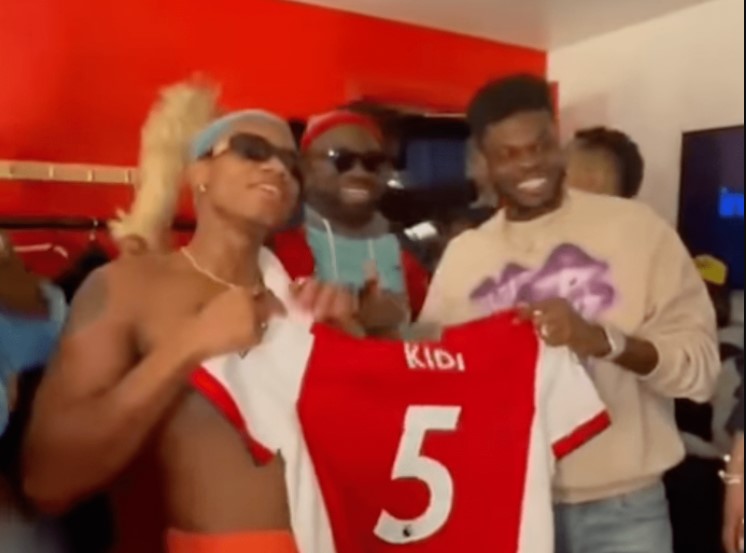 Arsenal midfielder Thomas Partey was present to support Ghanaian musicians Kuami Eugene and KiDi during their concert at the Indigo O2 Arena in London.

The two Lynx Entertainment signees sold out the 2,000 capacity venue and delighted fans with imperious performances.

They were also supported by some Ghanaian artistes, with Sarkodie and Stonebwoy passing through to also perform at the concert.

There was, however, a surprise visit as Ghanaian midfielder Partey also passed through to support KiDi and Kuami Eugene at their concert.

In a video that has gone viral on social media, the Arsenal star is seen backstage with the two young artistes as he presented them with a signed jersey.

This is not the first time that Partey has shown his support for Ghanaian artistes hosting concerts in the United Kingdom (UK).

Last year, the footballer was present at the Ghana Party in the Park event held in North London and presented signed jerseys to all the performing artistes, including Sarkodie, Amerado, Sefa, Mr Drew, Yaw Togg, Kweku Flick, Kofi Jamar and Kwabena Kwabena.

Earlier on Sunday, Partey had played a very important role in Arsenal’s 3-2 win against Watford in the Premier League.

The 29-year-old put up an assured performance in midfield as Mikel Arteta’s side secured all three points to move into the top four.

Partey won the most duels (8), completed the most take-ons (3) and won more aerial duels (3) than any other Arsenal player against Watford.

The Ghanaian also completed the most passes on the pitch (69) to help the Gunners to record victory.