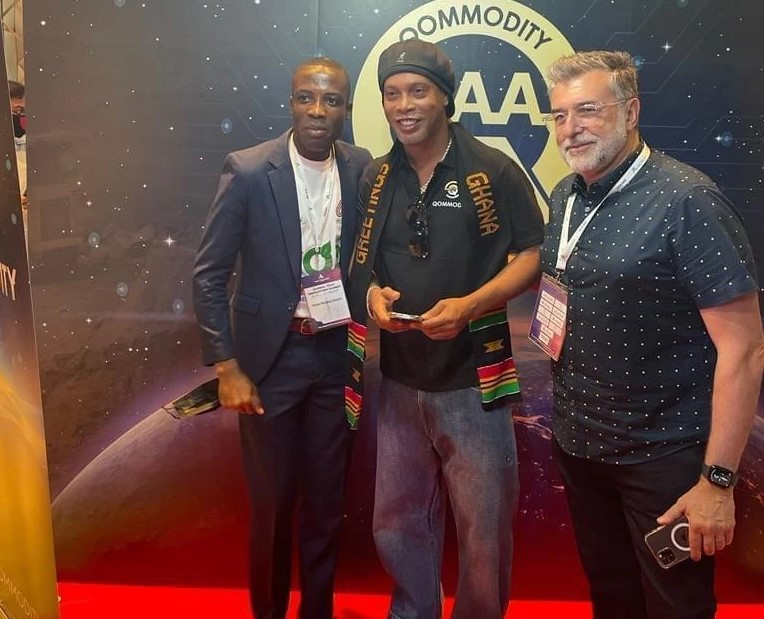 Brazilian Football legend, Ronaldinho Gauncho may have just endorsed Ghana after he was captured wearing a scarf designed with Ghana’s colours.

In a viral photo, the former Brazil international is seen posing for the cameras in a scarf with the inscription “Greetings Ghana”.

The said photo was taken at an event, with Ronaldinho flanked by two other men whose identities are unknown.

The 41-year-old is widely regarded as one of the greatest footballers ever, having dazzled for club and country in his prime.

He also won the Serie A title with AC Milan and is one of few players to have won the European and South American Champions League.

With Brazil, he was untouchable and was part of the Selecao side that the Copa America in 1999, the FIFA World Cup in 2002 and the FIFA Confederations Cup in 2005.

Ronaldinho officially retired from football in 2018, having scooped the FIFA World Player of the Year award three times.

The legendary footballer hasn’t visited Ghana yet but he faced the Black Stars a couple of times during his fulfilling career.

Ronaldinho broke Ghanaian hearts when he starred in Brazil’s 3-0 demolition of the West African country in the round of 16 of the 2006 World Cup in Germany.

He also featured in the Selecao’s 1-0 win over Ghana in an international friendly 11 years ago.