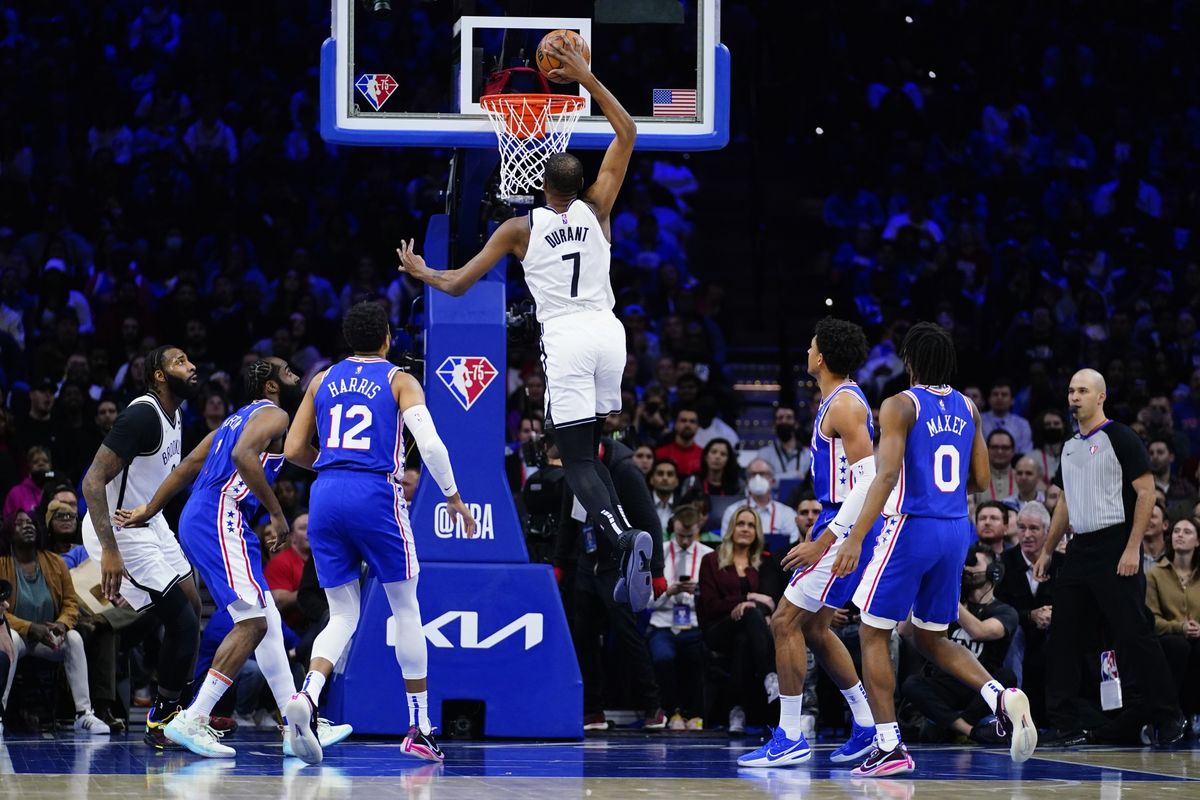 Ben Simmons did not play one minute for the Philadelphia 76ers in the 2021-22 season before being traded to Brooklyn in February. With the weight of that ordeal still fresh in everyone’s mind, many wondered whether he would travel to, much less play in, his new team’s first game back in a city ready to shower him with “brotherly love.”

Not only did Simmons make the trip, he even took the court in pregame warmups. The avalanche of boos that greeted him was every bit as loud and relentless as expected.

Simmons, wearing a designer hockey jersey and flashy jewelry, watched from the bench, likely taking delight in the vitriol deflected away from him. The three-time All-Star is continuing to recover from a back injury that has sidelined him since being swapped for Harden in a blockbuster deal at the trade deadline.

The jeers only grew when Simmons made a point not to shoot, but instead just passed to teammates — needling the most visible memory from his final game played for the 76ers.

The arena’s angst returned when, in the later stages of the game, Simmons had the gall to pick up a loose ball that bounced his way along the bench. But Simmons greeted it with a smile. His new Brooklyn teammates applauded the crowd’s effort, all of them smiling and laughing because by then the scoreboard had rendered Philadelphia’s famous scorn irrelevant.

Brooklyn’s 129-100 walloping of Philadelphia wound up being every bit as vindictive as Sixers fans were toward Simmons. The Nets had their own emotional point to make, and it was theirs that echoed long after the last Philly fan had left the building.

Durant and Irving combined for 49 points at an absurd 20-for-31 shooting clip. Their performance was a glaring contrast to their own decorated former teammate, James Harden. The former Kia MVP, who played all of 16 total games with both his co-stars in Brooklyn, shot a wretched 3-for-17, including 0-for-10 inside the arc. His struggles subdued his passing Reggie Miller for third all time on the NBA’s 3-pointers made list.

Brooklyn enjoyed every minute of it.

There was more, much more, than the entire team laughing with Simmons on the bench. When Joel Embiid got going early, Durant readily met the MVP candidate’s ready words with some choice ones of his own, clearly aware of and embracing the heat of the moment. Seth Curry turned and talked to his former teammates on the Sixers bench after drilling yet another 3-pointer, a reminder that he might not have been pleased to have been so readily included in the Harden-Simmons trade.

All night, the Nets never let up in scoring points or making a point in a matchup of superstars whose paths have crossed and crisscrossed and sharply diverted from one another.

Simply put, the Nets “wanted the smoke,” and they were smoking from the floor all night long.

“It just felt good to quiet all of them down midway through the game,” Durant said. “It was very quiet towards the end. We ain’t hear no more Ben Simmons chants from the Sixers fans.”

Simmons did oblige one fan for an autograph, with another being heard on a video widely circulated on social media yelling, “Why the grievance? Why spit in the face of Sixers fans? We did nothing but support you for five years, Ben. You know that.”

But such emotion represented the fierce loyalty each team has toward its new star in place of the old one that no longer wanted to be there. As early as the week of the trade itself — when Durant avoided drafting Harden on his All-Star team so pointedly no one on the broadcast could stop laughing —  it was clear the Nets were ready to move on from the failed triple-superstar experiment.

“We look at Ben as our brother,” Durant said. “We knew this was a hostile environment. It’s hard to chant at Ben Simmons when you’re losing by that much.”

“We definitely felt like Ben was on our heart,” Irving said. “If you come at Ben, you come at us.”

Meanwhile, Philadelphia was all too happy to swap out its own star who didn’t play for one who does. Harden is reunited with a general manager that believes in him to an unwavering degree. He is paired with yet another perennial superstar in Embiid and in first five games together — all wins — were a honeymoon of equal parts dominance and eye-opening success.

Thursday was a splash of cold water on all of that. Embiid’s 13 first-quarter free throws were nullified by Brooklyn’s otherworldly offense. Meanwhile every Harden miss recalled other big games — playoffs and otherwise — where many expected more from him.

“We got our ass kicked,” Harden said. “Since I’ve been here everything’s been sweet. We’ve been winning games. Tonight was good for us. We get an opportunity to come down to reality, watch film and just continue to get better making sure we hit our strides.”

Brooklyn’s playoff path likely begins in the Play-In Tournament. If it wins its first game, it will be the seventh seed and Philadelphia could be its foe should it claim the No. 2 seed. By then, Simmons will probably be playing, and he will have to speak, play and win for himself.

Until he does, his teammates are more than happy to have his back.