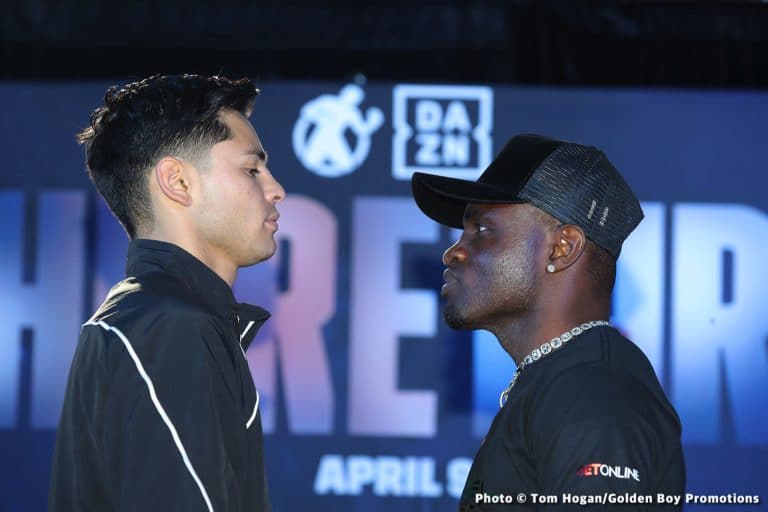 If even half of the big fights that are scheduled to take place this April deliver the kind of action we strongly feel they will, the month of April in the year 2022 just might go down as one of the most special in modern-day boxing history. There are so many big fights, each of them potentially thrilling that are set for April, it’s kind of crazy.

Look at this for a hectic schedule:

Okay, this is not a big fight, but Garcia – who will be making his return, having last fought in January of 2021 when he got off the floor to beat Luke Campbell – is a potential superstar and it will be great to see him back in action.

The return of GGG. Not having fought since December of 2020, Gennady Golovkin faces a potentially tough night against aggressive-minded banger Murata.

A two-belt middleweight unification clash, this one has thrilling slugfest written all over it. And as we know, GGG will enter the ring in Japan knowing a far bigger fight hangs in the balance – that third clash with Canelo Alvarez.

A welterweight unification showdown between two proven talents, this one might prove to be in intense battle. Spence has had just one fight since that nasty car crash and he is coming back from eye surgery. Ugas is coming off that life-changing win over living legend Manny Pacquiao. There really does promise to be some Sweet Science on display in this fight.

Tyson Fury’s final fight? The reigning and defending WBC heavyweight king says he will “smash” Whyte and then call it a career. Whyte as we know has said next to nothing in the lead-up to this fight, leaving it to Eddie Hearn to predict the upset KO win.

This fight cannot fail to be exciting, for as long as it lasts. And plenty of good judges feel this one will last quite a while, into the later rounds. Whyte might just push Fury harder than anyone other than Deontay Wilder has managed.

Dubbed “the biggest fight in the history of women’s boxing,” Taylor versus Serrano sold out MSG very fast and these two superb fighters are sure to deliver. This is the biggest test yet in the amazing career of Taylor, while the same could be said of Serrano and her career. It’s possible these two will fight more than once, perhaps engaging in a trilogy.

Annoyingly taking place on the same night as the women’s super-fight, this clash of unbeaten fighters should tell us a whole lot about each fighter. How good/great can Stevenson become? How special is Valdez? Both men have an abundance of skill and talent and both men feel they are the best in the world at the weight (and beyond in the case of Stevenson). Who wins this one? Who dares to make a pick?

One thing though; if this fight gets underway at the same time as Taylor-Serrano, or thereabouts – which fight will you tune in for?