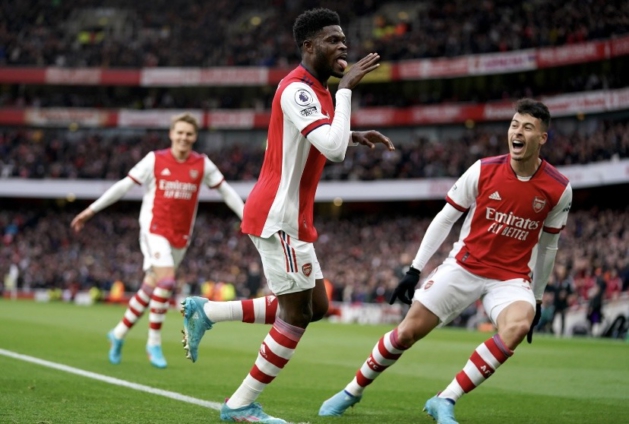 Arsenal manager, Mikel Arteta, has suggested the club is looking to build the team around Ghana international, Thomas Partey.

The 28-year-old was involved in all two goals as the Gunners sealed a 2-0 victory over Leicester City at the Emirates Stadium on Sunday.

Partey opened the scoring after just 11 minutes, heading into the net to give Arsenal the lead while also winning the penalty in the second half, which was converted by Alexandre Lacazette to wrap up all three points for Arsenal.

Partey’s adaptation to life in Arsenal have not been as easy as he expected it to be but the Ghanaian has been one of the Londoners’ top performers since December and was voted as the club’s Player of the Month for last month.

Speaking after the game, Arteta stressed that Partey can become one of the club’s best players hinting that team could be built around the former Atletico Madrid midfielder.

“He should be with those contenders [best players] because the ability he has is up there with the best in the team. Now he needs to show consistently that he can do that.”

“We are trying to adapt the game a little bit.

“Some of the things we are doing is to try and adapt the game for him to be able to be more decisive, to create more space for him.

“I think he is taking things well. It is the work we do in training to try to facilitate players to exploit their qualities as much as possible.

“That’s why we decided to sign him,” said the Arsenal boss.

“Everything takes some time. We have to recognise that he had a lot of injuries as well in a period where he didn’t get any consistency in terms of minutes and match exposure.

“He needed to adapt to a completely different game model than he was used to and now I think he is in a really good place.”

Arsenal are hoping for a return to UEFA Champions League football next season and currently occupy the fourth position with three games in hand.