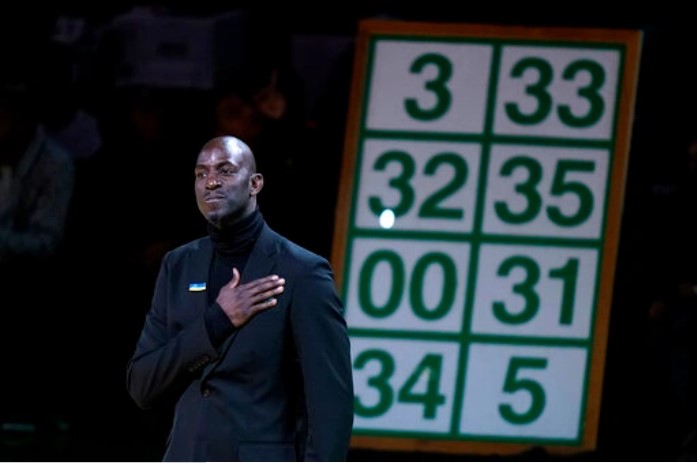 With a couple of curses, a primal scream, and a few tears, too, Kevin Garnett helped hoist his No. 5 to the TD Garden rafters on Sunday alongside the 2008 NBA championship banner he helped win after arriving in Boston.

On a day that featured live and video tributes from ex-teammates, former Celtics greats, other NBA A-listers — and even musician Kenny G — Garnett became the 24th person in franchise history have his number retired.

None of the previous honorees had quite the same combination of intensity, hard work and humour that Garnett brought when he joined Paul Pierce and Ray Allen for a New Big Three that ended the longest title drought in franchise history.

“Before he got here, we had one of our worst seasons. He was just that injection in the heart that we needed,” Pierce, whose No. 34 was retired in 2018, said in the postgame ceremony. “You brought a sense of culture to this team that was desperately, desperately needed. You brought Boston pride — Celtic pride — back.”

Kevin Garnett places his hand on his chest while seated in front of an NBA Championship trophy during ceremonies held to retire Garnett’s jersey No. 5 to the rafters following an NBA basketball game between the Dallas Mavericks and the Celtics. The Mavericks won 95-92. (AP Photo/Steven Senne)(Steven Senne | AP)

Wearing a dark suit and a black turtleneck, with a Ukrainian flag ribbon on his lapel and a Celtics green pocket square, Garnett came onto the court with his daughters and was greeted by former teammate and current broadcaster Brian Scalabrine.

With the championship trophy on a table behind them, Scalabrine asked where Garnett got the passion that propelled him from the fifth overall draft pick out of a Chicago high school to the basketball Hall of Fame.

“Nobody tells you how to use your superpower,” Garnett said, adding that he watched his mother work hard to raise him. “It’s in my DNA. I figured it out.”

The day also included a reunion with Allen, ending a public feud that began when the sharpshooting guard left the Celtics to sign with the Miami Heat. The two players hugged and were soon joined by Pierce before Garnett shouted into the microphone: “Ray’s next, damn it!”

Garnett played only six seasons in Boston, but they included five of his 15 career All-Star appearances and the 2008 championship — the 17th for the Celtics. He was the 2004 MVP with Minnesota, where he started and ended his 21-year NBA career.

“I’m glad to see you’re a member of this elite club,” Hall of Famer Bill Russell told him in a videotaped tribute. “I always enjoyed watching you play, and now our jerseys hang together in the rafters.”

The Celtics presented Garnett with a piece of the original parquet floor, a custom bottle of tequila, a portrait of him popping his Celtics jersey, and “an NFT gift basket.” His daughters joined him as he raised the banner to the rafters, tears streaming down his cheeks.

Other tributes came in from Kevin McHale, the Celtics Hall of Famer who was also the Timberwolves general manager who traded Garnett to Boston; the TNT broadcast crew, including Shaquille O’Neal and Charles Barkley; Danny Ainge, the general manager who built the ’08 championship team; and former teammates Kendrick Perkins and Rajon Rondo. (Former Piston Isiah Thomas, who was in the crowd, was booed.)

“You changed the culture of the Boston Celtics. You taught us so much about what it takes to win,” said ex-Celtics coach Doc Rivers, who is now coaching the Philadelphia 76ers. “Every coach in America — in the world — should have a chance to coach a Kevin Garnett, the greatest team player who ever played the game.”

During the game, which the Celtics lost 95-92 to the Dallas Mavericks, videos regaled the fans with stories of Garnett’s legendary intensity, including the time he challenged teammate Glen “Big Baby” Davis to arm wrestle.

Kenny G played “Loving You” on the saxophone. “From one KG to another, congratulations,” he said.

As fans filed out about an hour after the loss that snapped a five-game winning streak and was the day’s only sour note, the arena rang out with the 1970s-era “Gino Time” video that the Celtics would play when Garnett’s Celtics had wrapped up another victory.