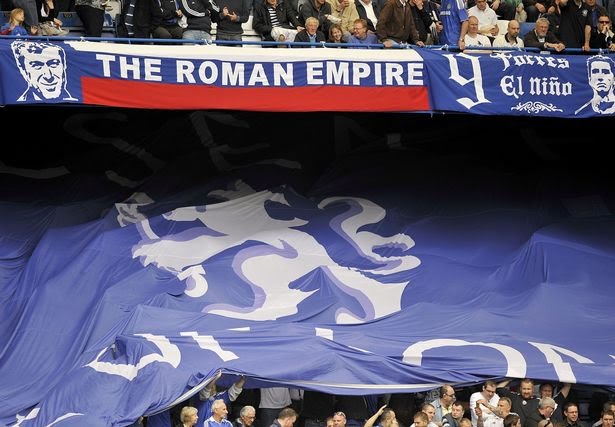 Chelsea fans continue to show their support for Abramovich

Chelsea fans have been urged to stop the “completely inappropriate” chanting of Roman Abramovich’s name by the UK Government.

The Stamford Bridge faithful have have shown their support for the Blues honcho by singing the Russian oligarchs name in recent weeks.

Blues fans backed Abramovich again during Sunday’s 1-0 win over Newcastle – and the Prime Minister’s spokesperson has now insisted that the chants have to stop.

“We recognise the strength of feeling around people’s clubs but that does not excuse behaviour which is completely inappropriate at this time,” he said.

“I think people can show passion and support for their club without resorting to that sort of stuff.”

Abramovich was slapped with sanctions just days after announcing he was planning to sell the club – bringing an end to his trophy-laden 19-year tenure in the capital.

The current license that Chelsea are operating on as a result of Abramovich’s sanctions would prohibit a sale.

However, the Government have confirmed that they would consider an alternative license to allow a sale to take place.

“We are open to the sale of the club, we would consider an application for a licence to allow that to happen in the right circumstances,” the spokesman added.

“But it is for Chelsea to determine the exact process. My understanding is potential buyers would approach the club, who would then need to apply for a further amended licence to facilitate the sale. As far as I’m aware that hasn’t happened at this point.”

Any sale process would have to be overseen by the Government to ensure that Abramovich would not benefit.

While the club have been plunged into chaos over the past few days, one small consolation is that the ongoing situation hasn’t seemed to deter any suitors.

According to reports, a number of interested parties are still in the frame to strike a deal for the Londoners.

A consortium consisting of Los Angeles Dodgers part-owner Todd Boehly and Swiss billionaire Hansjorg Wyss have been actively pursuing a deal while British billionaire Nick Candy has also expressed an interest in the club.

And Saudi Media – the biggest media group in the Middle East – are the latest interested party to make their move, with CBS Sports reporting that the group have tabled a £2.7billion bid for the reigning European champions.