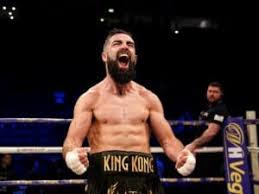 The former title challenger extended his current four-fight win streak following a fourth-round stoppage of Ghana’s Patrick Ayi Aryee. Carroll battered Aryee from the outset, overcoming an opening round cut to force a stoppage at 2:01 of round four Friday evening at Duty Free Tennis Stadium in Dubai, United Arab Emirates.

Aryee came in as a late replacement opponent, abandoning a scheduled fight earlier this month in his native Ghana to face Dublin’s Carroll. The step up in class was evident, as the unbeaten but untested Aryee (21-1-1, 13KOs)—who fought outside his home country for the first time as a pro—was outmatched from the opening bell. Carroll has made a point to fight at a more aggressive pace despite his low knockout-to-win ratio, taking the same approach in this fight.

The lone bit of adversity presented to Carroll came when an inadvertent elbow by Aryee produced a cut high atop Carroll’s scalp. It proved inconsequential, in fact prompting Carroll to pick up the attack in round two. Aryee was rocked and in trouble, his mouthpiece ejected courtesy of a flurry of punches from Carroll but spared a knockdown when the referee called time despite the absence of a lull in the action.

Carroll continued on the attack in round three, connecting with right hooks, left hands and body shots virtually at will. Aryee spent the entire round in defensive mode and under attack, not offering anything in return to slow down the attack of his vastly more experienced foe.

The fight was brought to a merciful end in round four, though perhaps with Aryee taking a few too many punches. Carroll had the Ghanaian trapped in a corner, unloading with power shots as referee Shehzad Janab stood idly by rather than stopping the onslaught. The fight was brough to a halt only after Aryee’s head trainer climbed the stairs onto the ring apron.

Carroll moves to 22-2-1 (7KOs) with the win, his fourth in a row since a stunning ten-round defeat to Maxi Hughes in August 2020. The bout took place just above the lightweight limit, with Carroll accepting the fight for the sake of staying active during the pandemic but taking the loss as a learning lesson to stick to junior lightweight.

Overall, Carroll has won six of his last seven since a competitive but clear points loss to then-IBF junior lightweight titlist Tevin Farmer in March 2019. Included among that stretch is a stoppage win over former junior featherweight champ Scott Quigg, who subsequently retired after the March 2020 defeat.