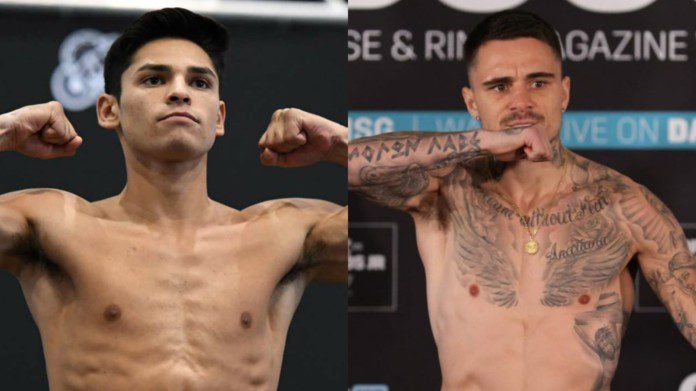 Golden Boy boss Oscar De La Hoya says he plans on beginning negotiations with George Kambosos Jr’s promoter Lou DiBella for a fight between the four-belt lightweight champion and Ryan Garcia as long as he wins his April 9th match against Emmanuel Tagoe.

With Lomachenko in Ukraine defending against the Russian invasion, that’s ready to fly to Australia to put a deal together for Ryan Garcia (21-0, 18 KOs) to challenge Kambosos Jr. (20-0, 10 KOs) for his next fight.

George Kambosos Jr is unified lightweight champion of the world

According to the latest news, Lomachenko won’t be given permission to leave Ukraine to challenge Kambosos for his titles on June 5th. That’s not surprising given what the Ukrainians are up against.

DEVIN HANEY IS OUT OF LUCK

It won’t make Devin Haney and his promoter Eddie Hearn happy if De La Hoya is able to put a deal together for Ryan Garcia to be the one that challenges Kambosos for “them beautiful belts” on June 5th at the Marvel Stadium in Melbourne, Australia.

Hearn felt that WBC lightweight champion Haney (27-0, 15 KOs) should be the one taking on Kambosos because it would be for the undisputed championship of the division.

However, the significance of a fight between Haney, 23, and Kambosos would be lost on the casual boxing fans in the U.S and Australia because they don’t follow the sport closely enough to be impressed with a clash between those two championships being for all the titles at 135.

Casual boxing fans want to see a fight between the two most popular fighters available, and that means Haney has to take a backseat to Ryan Garcia, who has a MUCH bigger profile on social media with his 8.7 million followers on Instagram.

To put that number in perspective. Canelo Alvarez, the face of boxing, has 12.7 million followers on Instagram.

For Ryan Garcia to have nearly as many followers as the more accomplished Canelo on social media, shows you that it REALLY doesn’t matter how many titles you hold. What matters is popularity, and Ryan is away ahead of Haney in that department.

All that time that Canelo has wasted collecting meaningless titles off of paper champions from England, and not comprehending the fact that he’s going in the wrong direction in trying to increase his popularity.

If Canelo had any sense, he’d follow Ryan’s path and start promoting himself on social media and fight some quality guys like David Benavidez and Gennady Golovkin for a change.

“I’m hearing that Lomachenko is having some difficulties getting over to Australia, we know what he’s doing in the Ukraine which is amazing.

“We’re willing to fly over to Australia and talk to DiBella and make this fight happen next for Ryan Garcia in Australia.

“That’s how committed Ryan Garcia is.”