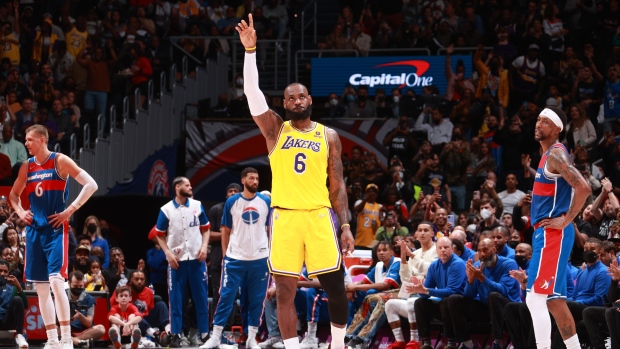 Los Angeles Lakers forward LeBron James made some NBA history on Saturday night. With his point production against the Washington Wizards, James passed Karl Malone to move up to second on the league’s all-time scoring list. Malone scored 36,909 points over the course of his career. Now, the only player that has scored more points than James in league history is Kareem Abdul-Jabbar (38,387).

Entering the evening, James needed 21 points to pass Malone, and he recorded them all in the first half.

James finished the game with 38 points, 10 rebounds and six assists. Ultimately though, his production wasn’t enough as the Lakers fell to the Wizards, 127-119.

Leading up to the feat, James acknowledged some similarities between him and Malone, especially in the way that they both took excellent care of their bodies over the course of their respective careers.

“Guys that just took care of their bodies for the majority of their career and always wanted to be available to their teammates,” James said. “The most important leadership for you is to try to be available as much as possible on the floor.

“I think myself and him, we always just tried to be in uniform and make plays and stay in condition and try to stay healthy, stay injury-free as much as you can and also be productive on the floor — so yeah, absolutely.”

This is the second time this month that James has rewritten the history books. Earlier this week, he became the first player in league history to notch 10,000 career points, rebounds and assists.

James, 37, now needs less than 2,000 points to pass Abdul-Jabbar to become the league’s all-time leading scorer. As long as he remains relatively healthy and doesn’t abruptly retire, it’s almost a certainty that he will indeed eventually claim the top spot. In the meantime, he doesn’t plan to focus on it.

“I will not allow myself to think about it,” James said. “I’ve always just played the game the way I’ve been playing it over the years, and these things have just happened organically by just going out and just playing the game the right way. Trying to win every game, playing the right way, playing for your teammates and things of that nature.”