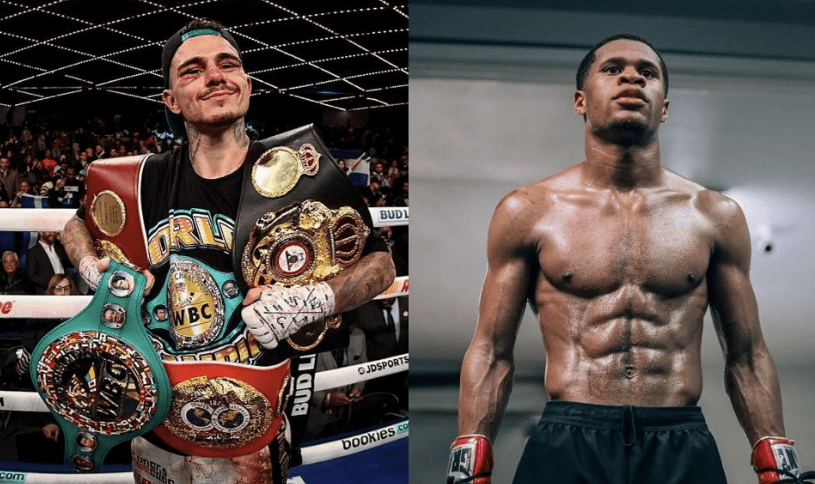 Negotiations are underway for the undisputed lightweight match between George Kambosos Jr. and Devin Haney, according to promoter Eddie Hearn.

The Matchroom Boxing promoter Hearn has confirmed that they’ve received an offer from Team Kambosos, and they’re looking it over. It’s unclear whether hearn, and Haney (27-0, 15 KOs) will play hardball in the negotiations, knowing that they’re the line option for the Australian fighter.

If Hearn and Haney overplay their hand, they could wind up with a handful of air, as this isn’t a fight that they can force on Kambosos like with the Tyson Fury vs. Dillian Whyte contest.

Haney isn’t Kambosos’ mandatory, so this is a fight that he can take or leave it depending on how the negotiations go.

The less popular Haney, 23, needs this fight a lot more than Kambosos, considering he doesn’t have much of a fan base in the U.S and is in a needy position. In contrast, Kambosos has a whole country behind him in Australis.

The negotiations have begun now that Vasyl Lomachenko has declined the fight against four-belt 135-lb champion Kambosos Jr (20-0, 10 KOs) after deciding to stay in Ukraine and defend against the Russian invasion.

“Yes, we are in negotiations; we’ve received an offer,” said Eddie Hearn on the Kambosos – Haney negotiations. “We’re reviewing that today and hopefully, if the terms are acceptable to Devin Haney, which I believe they will be, then we’ll move forward with the fight.”

If the terms aren’t acceptable to Haney, he’s probably going to be out of luck because the deal he’s being offered is reportedly the same as the one given to #1 WBC Lomachenko, who has done a heck of a lot more with his career.

Assuming that Haney isn’t going to be a problem, we’ll see him and Kambosos battle it out for the undisputed lightweight championship at the start of the summer on June 5th at the Marvel Stadium in Melbourne, Australia.

The Kambosos vs. Haney fight winner will hold all four titles at 135, but they won’t necessarily be the top dog.

Hearn will obviously say that Haney is the best fighter in the division should he defeat Kambosos, but the truth is, he’ll still have three hurdles to leap over for him to cement himself in as the best in the 135-lb division.

To be the genuine #1 at lightweight, the Kambosos-Haney winner will need to defeat the Gervonta ‘Tank’ Davis vs. Rolando ‘Rolly’ Romero winner, Ryan Garcia, and Lomachenko when he returns from Ukraine.

Until then, the Kambosos vs. Haney winner will be considered a belt holder but not the #1 guy in the lightweight division.