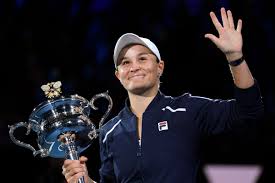 Australian tennis great and current world number one Ash Barty has announced her retirement from the sport at just 25 years old, saying “the time is right now for me to step away and chase other dreams and to put the racquets down.”

“I wasn’t quite sure of how I was gonna do this,” an emotional Barty said to good friend and former doubles partner Casey Dellacqua in a video posted to Barty’s social media.

She said: “It’s hard to say … I’m so happy and I’m so ready. I just know at the moment in my heart for me as a person this is right.”

Barty is the current world No. 1 women’s singles player, just the second Australian to reach that status in the WTA rankings era after fellow Aboriginal woman Evonne Goolagong Cawley.

Barty won three Grand Slam singles titles, her first a shock victory at the French Open in 2019, before winning Wimbledon in 2021 and the Australian Open earlier this year – making her the reigning champion in two of the four Grand Slams.

She finished the past three calendar years as the world’s number-one ranked player, a remarkable achievement reflecting her consistency across all court surfaces. That record placed her in the esteemed company of Chris Evert, Martina Navratilova, Steffi Graf and Serena Williams.

She also won the 2018 US Open in women’s doubles alongside Coco Vandeweghe, reaching a personal ranking as high as fifth in the world in doubles. In 2021, she partnered fellow Australian John Peers to claim a bronze medal in mixed doubles at the Tokyo Olympics.

A humble champion, Barty was awarded the Young Australian of the Year in 2020 and has garnered a host of other commendations for her work on and off the court.

Barty previously took an indefinite break from tennis after the 2014 US Open, subsequently converting to cricket and becoming a professional player for the Brisbane Heat in the inaugural edition of the Women’s Big Bash League.

At the time, she was ranked 40th in the world in doubles and outside the top 200 in singles. Today, her second retirement comes at the top of her game, undoubtedly the finest player in the world and strong favourite to add to her Grand Slam haul this season.

Barty told Dellacqua: “I kind of wasn’t sure how I was going to do this. But I think so many times in my life, both my professional and personal, you’ve been there for me. I just couldn’t think there’s no right way, there’s no wrong way, it’s just my way.

“This is perfect for me to share it with you, to talk to you about it with my team, my loved ones, that I will be retiring from tennis. That’s the first time I’ve actually said it out loud. It’s hard to say, but I’m so happy and I’m so ready and I just know at the moment in my heart for me as a person, this is right.

“I know I’ve done this before but in a very different feeling, and I’m so grateful to everything that tennis has given me. It’s given me all of my dreams plus more, but I know that the time is right now for me to step away and chase other dreams and to put the racquets down.”

She added: “It’s something that I’ve been thinking about for a long time. I’ve had a lot of incredible moments in my career that have been pivotal moments. Wimbledon last year changed a lot for me as a person and me as an athlete – when you work so hard your whole life for one goal, and I’ve been able to share that with so many incredible people.

“But to be able to win Wimbledon, which was my dream, the one true dream that I wanted in tennis, that really changed my perspective. I just had that gut feeling after Wimbledon and I’d spoken to my team quite a lot about it. There was just this little part of me that wasn’t quite satisfied, wasn’t quite fulfilled.

“Then came the challenge of the Australian Open, and I think that for me just feels like the most perfect way, my perfect way, to celebrate what an amazing journey my tennis career has been. As a person, this is what I want, I want to chase after some other dreams that I’ve wanted to do and always had that really healthy balance, but I’m really, really excited.”

“We wish Ash only the very best and know that she will continue to be a tremendous ambassador for the sport of tennis as she embarks on this new chapter of her life,” he wrote in a statement.

Australian tennis player Thanasi Kokkinakis, who is also 25 and won the men’s doubles at the 2022 Australian Open, tweeted “Respect it” in response to Barty’s decision.

American tennis player Madison Keys, who Barty knocked out in the women’s singles semi-finals, congratulated the Aussie champion on an amazing career.

British tennis star Andy Murray said he was happy for Barty, but “gutted for tennis”.

While, former world no. 1 Karolína Plíšková said it was privilege to share a court with her.

“An incredible tennis player but more importantly one of the nicest people on tour,” she said.

Fellow Czech player Petra Kvitová said she was “so happy” to have been able to share the court with Barty and that tennis would never be the same without her.

“Ash, I have no words… actually you are showing your true class leaving tennis in this beautiful way,” she wrote.

“You are all class, your commitment to excellence in your chosen field in tennis … I’m sure anything you turn your hand to you are going to be a great success, and I have no doubt that will be the case as you go forward with the next chapters in your life.”