Kyrie Irving intends to re-sign with Nets in free agency 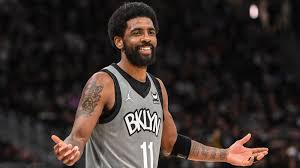 Nets guard Kyrie Irving is an unrestricted free agent this summer, but said during shootaround on Saturday morning that he intends to re-sign with Brooklyn this summer.

Irving wants to build a legacy in Brooklyn, and wants to do so with close friend and fellow star Kevin Durant.

We’ve seen this story before with Irving, who told fans after his first season with Boston in 2017 that he planned to re-sign with the Celtics following the conclusion of the 2018–19 season.

He even went so far as to make a Nike commercial out of it with his dad, saying that his father was the reason he wears number 11, and wanted to make sure that nobody else would. The commercial took place on the floor of TD Garden, and zoomed out to a view of retired Celtics numbers in the rafters.

After things didn’t go as planned during Irving’s final year with the Celtics, he bolted in free agency for the Nets, where he has played ever since.

Irving is just 30 years old and is playing some of the best basketball of his career. Despite only playing in 20 games this season due to New York City’s vaccine mandate that has not allowed Irving to play in home games as an unvaccinated player, he has still posted great numbers. He is averaging a career-high 28.5 points per game on 49.4% shooting.

New York City lifted its private business vaccine mandate for local athletes and performers earlier this week, allowing Irving to play in home games the remainder of the regular season and the playoffs.

The Nets enter Saturday night’s game with the Heat with a 38–35 record, which puts them in the eighth spot in the East. With only nine games remaining, Brooklyn is a near surefire participant in the play-in tournament for the playoffs.