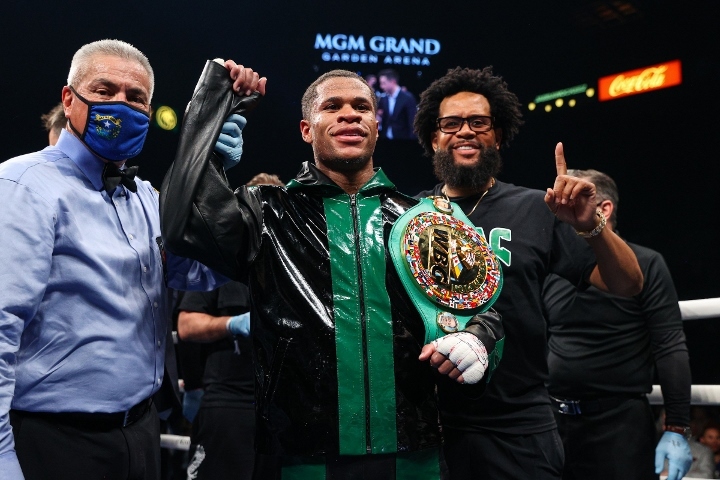 Devin Haney has the fight he said he wanted most for the past four months.

BoxingScene.com has confirmed that Haney has agreed to challenge George Kambosos Jr. on June 5 at Marvel Stadium in Melbourne, Australia. ESPN will televise their 12-round, 135-pound title fight, which barring a draw or no-contest, will crown boxing’s first fully unified lightweight champion in the four-belt era.

As part of Haney’s agreement with Lou DiBella, Kambosos’ promoter, and Bob Arum’s Top Rank Inc., which has an exclusive content agreement with ESPN, he has agreed to an immediate rematch clause that would obligate him to box Kambosos again in Australia if Haney wins their upcoming bout and remains a lightweight. If Haney were to defeat Kambosos in back-to-back bouts, the 23-year-old Las Vegas resident could then face Vasiliy Lomachenko in what would be an ESPN Pay-Per-View event.

The Kambosos rematch and Lomachenko bout would be contingent on Haney staying within the lightweight division if he were to beat Kambosos in a main event ESPN will air the night of June 4 in the United States.

None of the parties involved would comment when reached by BoxingScene.com on Sunday afternoon.

A press conference is expected to take place in Melbourne at some point this week, but contracts had not been signed as of Sunday afternoon. Tickets for the event will go on sale thereafter.

ESPN.com’s Mike Coppinger first reported Sunday afternoon that Haney had agreed to the deal offered to him last week.

Haney’s decision ended a whirlwind week-and-a-half during which Lomachenko withdrew from a June 5 fight against Kambosos at Marvel Stadium. Ukraine’s Lomachenko pulled out of their lightweight title bout because he remains committed to assisting in his home country’s war with Russia.

DiBella then negotiated with DAZN executives to have that streaming service offer Kambosos-Haney and an immediate rematch, if Haney won, to its subscribers. When those talks ceased late last week, DiBella turned his attention to bringing Kambosos-Haney to ESPN.

Haney’s past six fights have been streamed by DAZN, which, through its partnership with Eddie Hearn’s Matchroom Boxing, made a significant financal commitment to the WBC world lightweight champion.

DiBella and Kambosos had leverage, however, because Kambosos owns the IBF, WBA, WBC franchise and WBO lightweight titles.

The Victorian government in Australia also has committed to substantial backing of Kambosos’ first defenses of his lightweight championships in an effort to promote tourism in Melbourne, which has a large Greek population. Kambosos was born and raised in Sydney, but he is of Greek descent.

Haney had said publicly that he would accept the same financial package Lomachenko accepted to battle Kambosos if it were offered to him. DiBella’s offer to Haney, who was not contractually tied to DAZN or Matchroom, was at least equivalent to the deal Lomachenko accepted for June 5.

In addition to full unification, their agreement means Kambosos (20-0, 10 KOs) and Haney (27-0, 15 KOs) finally will have the opportunity to determine who is the WBC’s true lightweight champion.

The 28-year-old Kambobos upset Teofimo Lopez by split decision in their 12-rounder November 27 to win four 135-pound crowns, yet Haney has a legitimate claim to the WBC’s lightweight title. The Oakland native defeated Russia’s Zaur Abdullaev (15-1, 9 KOs) by technical knockout after four rounds to win the WBC interim championship in September 2019 at Madison Square Garden’s Hulu Theater in New York.

The WBC later elevated Haney to the status of world champion and made Lomachenko its franchise champion, which enabled him to fight Lopez. Lomachenko and Lopez are both promoted by Top Rank, which wanted their fight in conjunction with its ESPN partnership over Lomachenko-Haney.

Las Vegas’ Lopez (16-1, 12 KOs) upset Lomachenko (16-2, 11 KOs) by unanimous decision in their own 12-rounder in October 2020 at MGM Grand Conference Center to win the IBF, WBA, WBC franchise and WBO belts. Kambosos was the IBF’s mandatory challenger for one of Lopez’s championships when he beat the heavily favored Lopez four months ago at Hulu Theater.