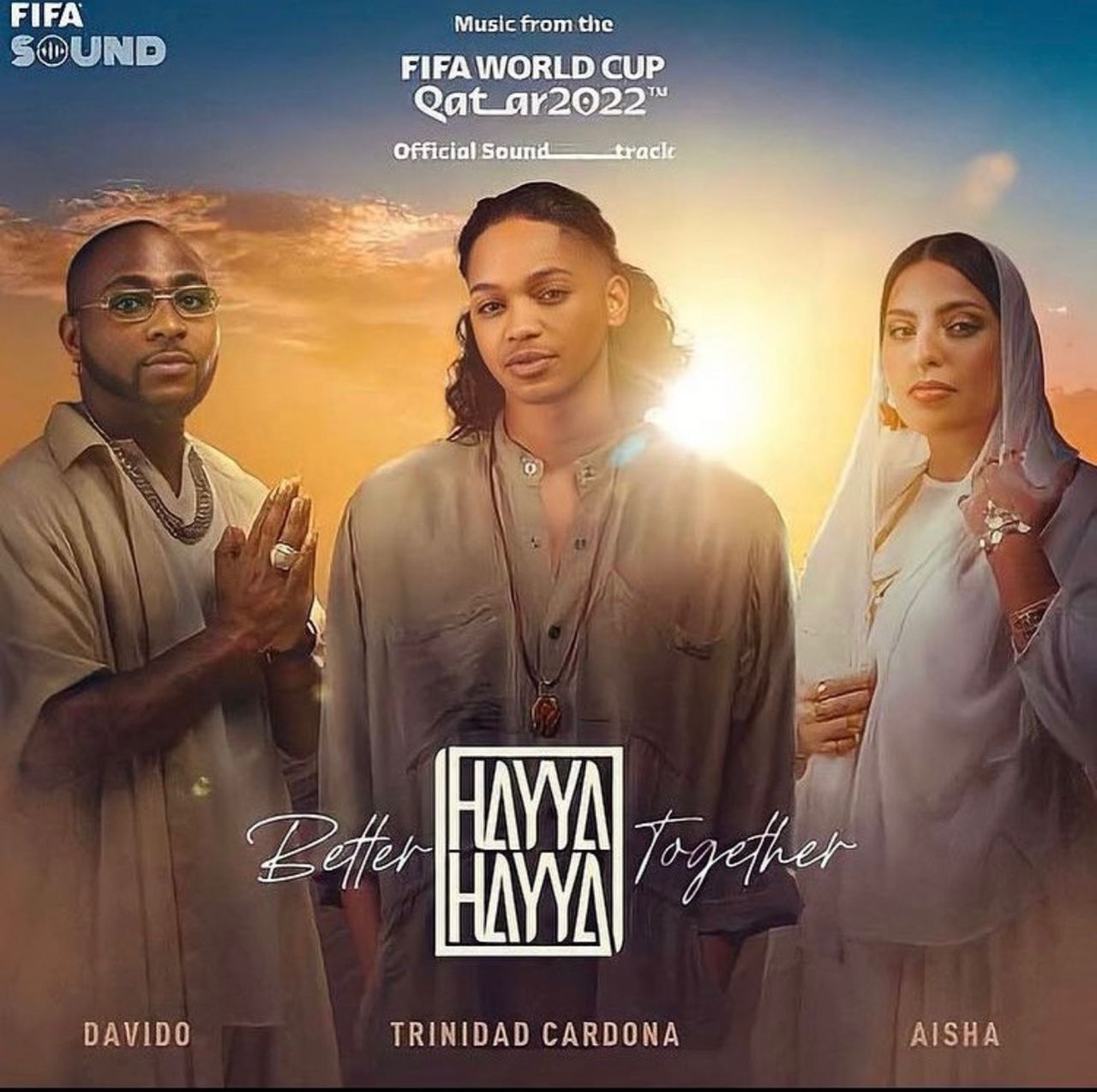 The FIFA World Cup Qatar 2022™ Official Soundtrack kicks off today with the release of the single Hayya Hayya (Better Together), featuring Trinidad Cardona, Davido and Aisha, ahead of tonight’s final draw for the tournament.

With the announcement of the single and the FIFA World Cup Qatar 2022™ Official Soundtrack, FIFA continues to build on the FIFA Sound strategy announced in early 2021 and to connect with audiences worldwide through the shared passions of football and music. The entertainment strategy was conceived to create innovative and meaningful connections between football fans, music enthusiasts, players, artists, and the game and songs they all love.

The combination of breakthrough US star Trinidad Cardona, Afrobeats icon Davido and Qatari sensation Aisha captures the spirit of the FIFA World Cup™ and the FIFA Sound strategy by bringing together inspiration from across the globe.

“By bringing together voices from the Americas, Africa and the Middle East, this song symbolises how music – and football – can unite the world,” said FIFA Chief Commercial Officer Kay Madati. “As part of FIFA’s revamped music strategy, the multi-song soundtrack will bring passionate fans closer to the spirit of the FIFA World Cup like never before.”

Drawing on R&B and reggae influences, the song epitomises the excitement of a football festival that will light up the world later this year.

The track’s debut public performance will take place tonight in front of a worldwide audience of football fans, who will tune in from around the globe to follow the highly anticipated draw starting at 19:00 local time.

The song is the first in a selection of soundtrack singles that will hit the airwaves over the coming months, as anticipation grows in the lead-up to the start of the FIFA World Cup on 21 November 2022.

It is the first time that the tournament’s soundtrack will feature a multi-song collection, with international artists showcasing diverse musical genres that span the world, setting the tone for a truly global celebration.

Trinidad Cardona, the Arizona-bred pop singer who burst onto the scene in 2017 with the viral hit Jennifer before enjoying global success with the follow-up single Dinero, shared his passion for the message of the song. “When I first heard the song, I was instantly put in a good mood,” he commented. “It’s a celebration, it embodies everything the FIFA World Cup stands for. People from all around the world coming together, and I just love that message.”

Davido, the first solo African artist to sell out a major concert venue in Europe in 2019, shared Trinidad’s enthusiasm for the global message of the song, remarking: “I’ve grown up all over the world. And the more I travelled, the more I realised that we are all one, one people, one world. So, when this came to me, I jumped on it. To be a part of this event that brings together the whole world, and to be a part of this song? ‘We are better together’ went right to my heart. Beautiful, man, beautiful. How could I say no?” Davido, who grew up in Nigeria, has spearheaded a worldwide Afrobeats revolution with smash hits like Fall and If, as well as with his latest album, A Better Time.

The local artist joining the track, Aisha, highlighted her personal connection: “I am blessed and honoured to exist in these exciting times, where I get to witness and be part of this huge milestone for my country, Qatar. The song’s message of togetherness and joy resonated with me as joy was present with us throughout the journey of making this song. It is a dream come true to perform for the FIFA World Cup final draw and be part of such an important song.” Aisha is one of Qatar’s most popular singers, with her talent, drive and passion having led to headlining performances around the world, including at the United Nations General Assembly in New York and at the grand opening of Doha Festival City.

Hayya Hayya (Better Together), released by Def Jam Recordings and produced by RedOne, is streaming everywhere now and you can tune in to see tonight’s draw , which will feature the first public performance of the song with some special guests.