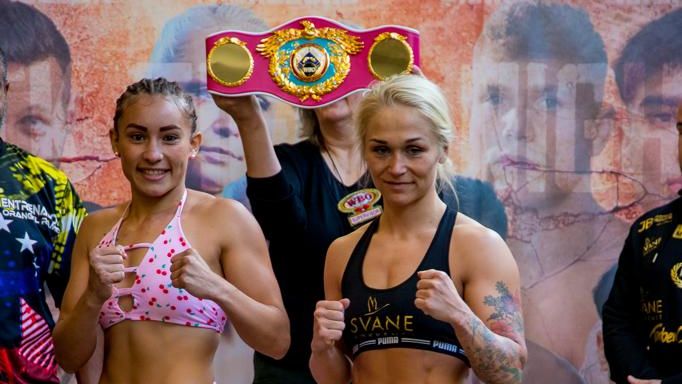 WBO world bantamweight title holder Dina Thorslund is pushing for huge unification fights with Ebanie Bridges and the other champions.

The 28-year-old will start banging the drum for clashes with Bridges, Jamie Mitchell and Yuliahn Luna if she comes through a defence of her title in Denmark on Saturday night.

Bridges won the IBF belt last month but the unbeaten Thorslund believes she would be too strong for the Australian and anyone else in the 118lbs division.

Thorslund faces Niorkis Carreno in Holstebro this weekend – on a bill that also includes Alex Dilmaghani in an eight-round contest against Victor Julio – and if she keeps hold of her belt then the Dane’s focus will immediately turn to unification fights.

“It would be amazing to fight Ebanie but the result would not come as a surprise to people because I would win because I am better than her,” Thorslund (17-0) said.

“But it would be a great fight and the build-up could be real fun with two blonde bombers!”

“I believe I am strongest fighter at bantamweight and with the right preparation, I can take all of the belts and unify the division,” she added.

“That is my goal and to get to this point in my career has been a long time coming, especially with no promoter for so long, but with Probellum backing me I hope we can make these massive fights for women’s boxing.”

Two-weight world champion Thorslund joined forces with Probellum, the fastest growing brand in the sport, in January as is part of a building roster of female fighters.

Lightweight world champion Estelle Mossely made a historic defence of her title in Dubai last month, while women’s boxing pioneer Hanna Gabriels has signed a co-promotional deal with the company.