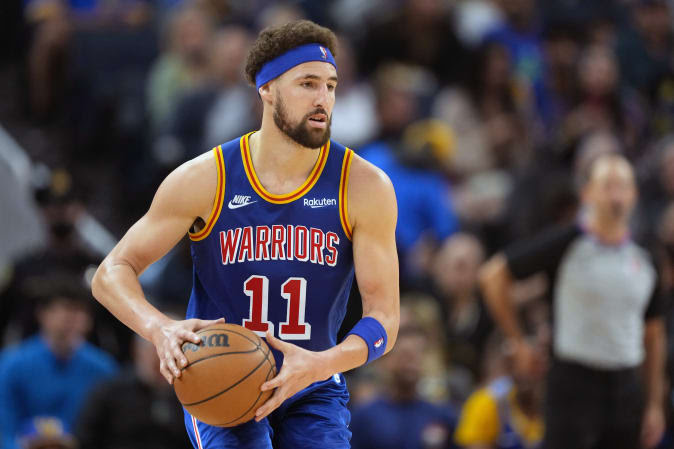 Golden State coach Steve Kerr made a point to tell Klay Thompson he played his best game yet since returning in January from a 2½-year absence following surgeries and long rehabs on his left knee and right Achilles.

Jordan Poole keeps doing his part to provide a spark when the Warriors are missing stars like Thompson or, currently, Stephen Curry.

Thompson scored 33 points with six 3-pointers and Golden State won its third straight game after dropping four in a row, running away late from the depleted Los Angeles Lakers for a 128-112 victory Thursday night.

Of Thompson’s 22 shots, Kerr liked all but two of them.

“I thought it was Klay’s best game,” Kerr said. “I know he’s scored more but just in terms of the shot selection, he just had his feet on the ground underneath him, his balance was great, his decision-making was really good. So a lot of good things happening.”

Poole added 19 points and a career-high 11 assists for the Warriors on a festive night at Chase Center, where huge Golden State fan and K-pop star BamBam brought the house down with a spirited halftime performance in the Warriors’ final regular-season home game.

“Jordan’s been amazing. He’s had a fantastic season,” Kerr said. “He’s filled in for both Klay and Steph when they’ve been injured. He’s done anything we’ve asked him to do.”

Poole continues to show his growth by asking questions to veterans like Andre Iguodala and making the extra pass to create shots for teammates.

“It just feels really good putting my teammates in really easy situations to score the ball, especially getting guys going early in case the game gets close at the end, they’ve got a rhythm and they’re a bit comfortable,” Poole said.

Andrew Wiggins added 17 points in the Warriors’ final tune-up in the Bay Area before holding home-court advantage to start the playoffs next weekend.

“We’re going to try to win all three games. We’re just going into this thinking, let’s build momentum. If we could capitalize on these last two wins and go into next week on a winning streak, I think that would serve us really well,” Kerr said. “But whatever happens with the seeding happens, and we’ll just play whoever we will play.”

Los Angeles hit eight of its initial 12 shots and had 11 trips to the free-throw line by the 5:07 mark of the first quarter — shooting 38 free throws in all to 10 by the Warriors.

The previous three meetings between the rivals had been decided by seven or fewer points.

Tim Hardaway was honored before the start of the second quarter for his election to the Naismith Memorial Basketball Hall of Fame — announced by his fellow Run TMC mates and Hall of Famers Chris Mullin and Mitch Richmond.

Kerr hardly considers James close to done despite being 37.

“LeBron is absolutely still one of the great players in the league,” Kerr said. “He showed that this year. … He’s an all-time great and even though he is past his prime based on age and mileage, he’s one of the very best players in the world.”

Lakers: James has a sprained left ankle, Davis a sprain in his right foot and Westbrook a sore right shoulder, while Anthony is recovering from a stomach bug. Lakers coach Frank Vogel remained hopeful some of them might play Friday at home against the Thunder. … The Lakers shot 4 for 18 from 3-point range in the first half and 9 of 32 overall. … Dwight Howard received a technical with 1:47 left in the first half. … Los Angeles has lost 16 in a row on the road vs. Western Conference teams. … The Lakers waived forward Trevor Ariza, whose ankle surgery limited him to 24 games. “Derailed most of his season and his impact on our team this year, yes,” Vogel said.

Warriors: Kerr said Thompson, Otto Porter Jr. and Iguodala each will get one of the weekend back-to-back games off to rest. Iguodala had seven assists as the Warriors finished with 39. … Golden State went 31-10 at home. … The Warriors sold out their 418th straight game with a capacity crowd of 18,064. The sellout streak goes back to Dec. 18, 2012.

Warriors: At the Spurs on Saturday. Golden State has won its last two games in San Antonio.