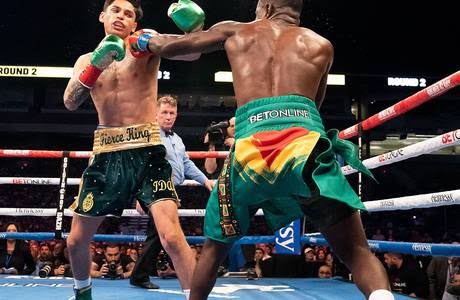 In his first fight in 15 months, Ryan Garcia looked sharp against veteran Emmanuel Tagoe. Garcia won via unanimous decision inside the Alamodome in San Antonio, with the scores reading 119-108, 119-108 and 118-109.

Garcia last fought in January 2021 against Luke Campbell. He was working with Eddy Reynoso at the time. On Saturday, Joe Goossen led him to the ring; observers didn’t know what to expect from the 23-year-old fighter. While he looked a little rusty, Garcia did use his power to land huge blows. Garcia had his hands down early but it didn’t matter as Tagoe failed to do significant damage. Garcia also landed chopping blows that were effective and damaging.

Garcia dropped Tagoe twice, in the second and 10th rounds. He also had Tagoe up by the ropes throughout the contest. That forced Tagoe to focus attention on defense.

According to CompuBox, Garcia landed 165 shots to Tagoe’s 90. Further, 160 of Garcia’s shots were for power, and he landed single-digit shots in a round only twice. Tagoe landed double-digit shots just three times

Garcia moves to 22-0 with the win. It was his first decision since beating Carlos Morales in 2018. The hope is that he faces Gervonta Davis next. There is also a chance he faces Joseph Diaz, whom Garcia was supposed to fight before needing surgery.

Tagoe, a former champion, had his 32-fight win streak snapped.