Handball incident: I would’ve done the same thing if I was in Suarez's position – Gyan 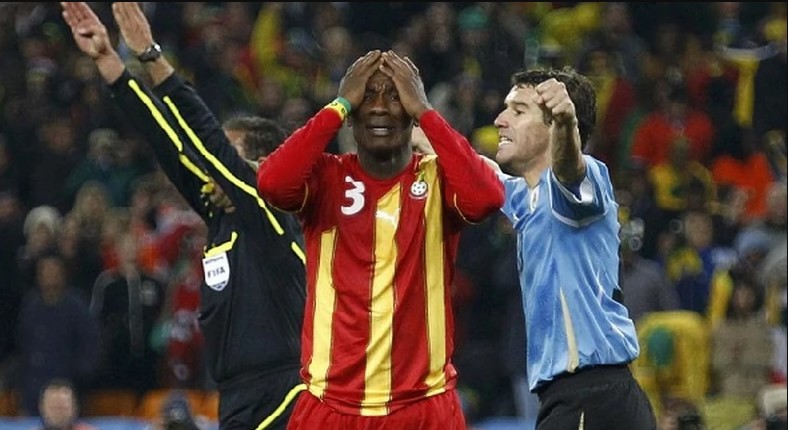 Former Black Stars skipper Asamoah Gyan has revealed that he would have acted similarly to Luis Suarez if he found himself in the Uruguay striker’s position during the 2010 World Cup.

Ghana was on the verge of becoming the first side team to reach the last four of the World Cup before losing on penalties to Uruguay in South Africa.

The defeat was made more painful by the fact that Ghana had a penalty in the final seconds of extra time after Suarez used his hand to keep out Dominic Adiyiah’s goal-bound header.

Although Suarez was sent off for his unsporting act and Ghana awarded a penalty, Gyan missed from the spot.

Uruguay eventually won the game 4-2 on penalties to progress to the semi-final of the World Cup at the expense of Ghana.

Discussing the incident, Gyan said it got into his head and he even wanted to hit Suarez when the pair faced each other later in the Premier League.

He was, however, quick to add that he realised he had to let it go, admitting he would have acted in the same manner if he was in Suarez’s position.

“People spoke about the incident and it got into my head a bit. I remember when Sunderland faced Liverpool, during the exchange of handshakes, I watched him with some eye,” Gyan said on Peace FM.

“I wanted to even punch him because people had said things that had gotten into my head, but I realised I had to let it go because I would’ve done the same thing if I was in his position.”

Gyan said he is a huge fan of the centre-back and backed him to be a great addition to the Black Stars ahead of the Qatar 2022 World Cup.

“If he is rated among the top three defenders, definitely he is eligible to play for the national team if only he is in the plans of the coach and he [Salisu] has it in mind to play [for the country].

“Definitely, he should be ready for the national team, but it will depend on him and the technical team,” he added.