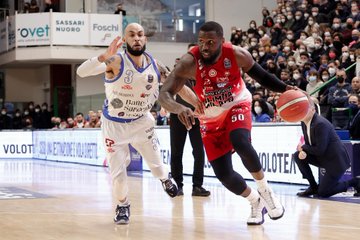 The win was however clinched without Bentil bar a few minutes into the fixture since Bentil exited the contest after playing just three minutes.

The 27 year old 6 foot 8 inch player was a starter and registered two points and a steal in three minutes prior to the injury that is yet to be fully detailed by Milano according to BasketNews.

It was a rare start for Bentil who has spent most of his time with the Italian giant as a spark plug off the bench including continental games in the Euroleague Championship.

The Italian side is scheduled to play Turkish side Anadolou Efes in the quarterfinals of the Euroleague with Game 1 set to be played on April 19 in the best of five game series.

Bentil is the first Ghana born player to play in the NBA during his brief stint with Dallas Mavericks.