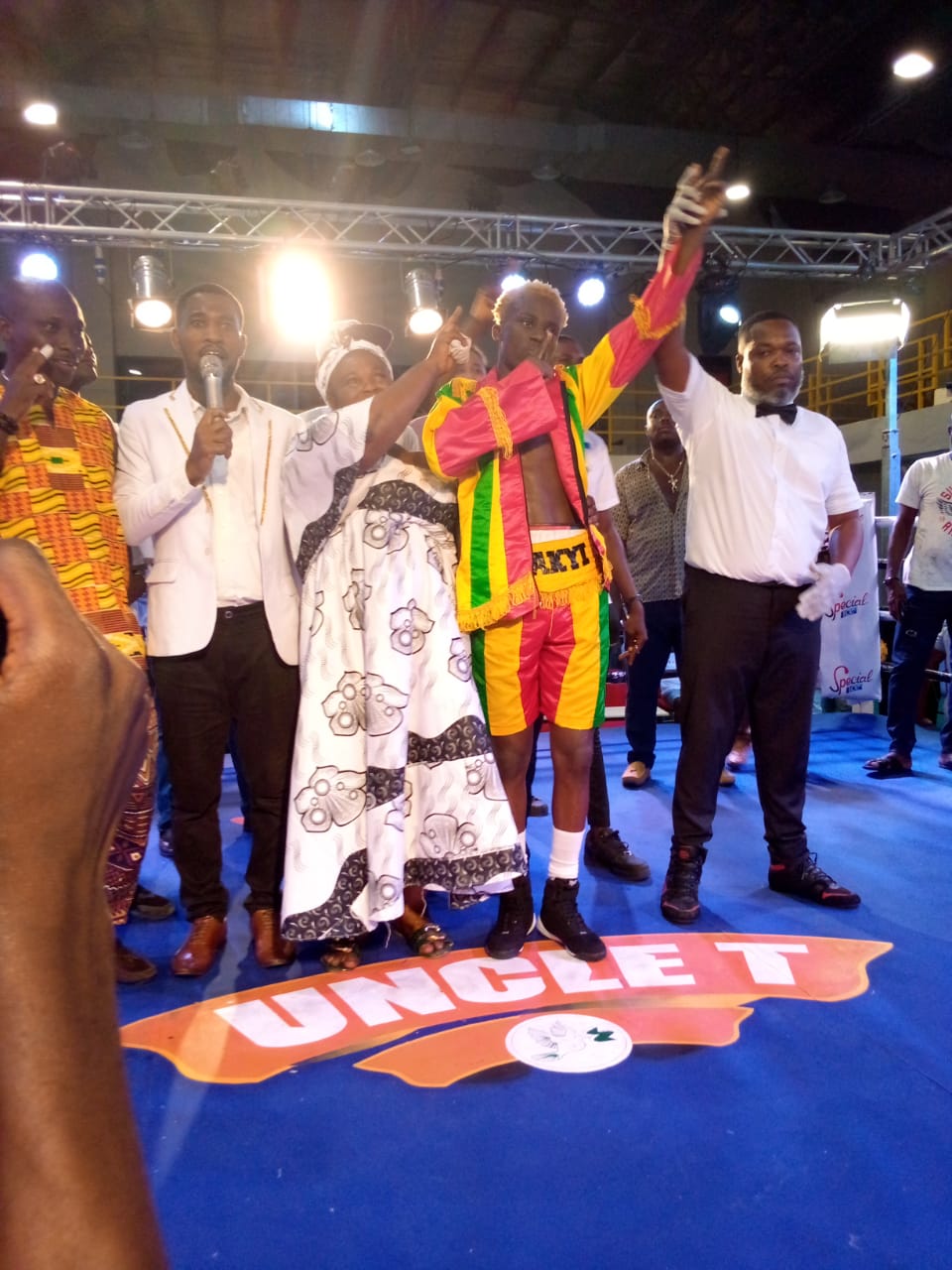 Tokyo 2020 Olympic Games bronze medalist, Ghana’s Samuel Takyi announced his entry into the paid ranks with an impressive stoppage of vastly experienced tough contender Kamarudeen Boyefio at the Ga-Mashie Hall of the Bukom Boxing Arena in Accra on Friday night.

The tough-talking Boyefio had intentions of spoiling the party but a very determined and audacious Takyi weathered the early storm and promptly assumed control of the fight, landing flush and deft punches to the head and body of his opponent who resorted to unabated bobbing and weaving to escape the onslaught.

Takyi, who had stated in the pre-fight press conference that he’d show no respect to any opponent in the ring adhered strictly to that, adopting a resolute stance; never retreating, always advancing.

The bout was eventually stopped in round two after Takyi unleashed a flurry of punches on his opponent, a barrage which Boyefio had no answer to, giving the bright prospect his first professional win.

An elated Takyi expressed appreciation to all and sundry who have contributed to his journey. He served a warning to all 135 pound fighters, saying, he’s in to take over.

The bill which was put together by Bazooka Boxing Promotions owned by the legend, former WBA welterweight champion of the world, Ike ‘Bazooka’ Quartey and managed by his son, Clement Quartey took place at the Ga Mashie Hall of the Bukom Boxing Arena on Friday April 15 featured other exciting bouts:

In a super lightweight scrap, Emmanuel Ardey Aryee of the Ghana Prisons Service defeated Francis Aryee with a fifth round RTD.

Issah Awal also won by a KO against Enoch Lamptey in a lightweight fray.

Rising star, Michael Dicardi Nelson AKA Mayweather did quick work of debutant Dennis Nyarko in a bantamweight clash, handing him a round two KO.

Issah Inusah of Attoh Quarshie Gym survived an early scare before dispatching the ferocious Abubakar Mustapha in round seven. Inusah had to survive two knock downs before his power bailed him out in their light heavyweight duel.

The much anticipated super lightweight rematch between Derrick Quaye and Daniel Quaye was resolved albeit under controversial circumstances when the eventual winner by unanimous points decision, Derrick Quaye was found using a suspicious concoction in his corner during the bout.

Officials of the Ghana Boxing Authority (GBA) confiscated the concoction and would make their findings known in due time. Derrick Quaye’s purse has thus been withheld until further notice.

The atmosphere in the Ga-Mashie Hall of the Bukom Boxing Arena was ecstatic and frenzied as fans and patrons relished the exchange of fisticuffs: chanting the slogans of their favoured fighters.

Ring Announcer for the night Samuel Opoku Amoah ( Sam Nana Gold) held it down with dexterity and verve.

Hopefully this marks the nascent dawn of a world beater: Samuel Takyi who is promoted and handled by a man who has done it all and seen it all, Ike ‘Bazooka’ Quartey.