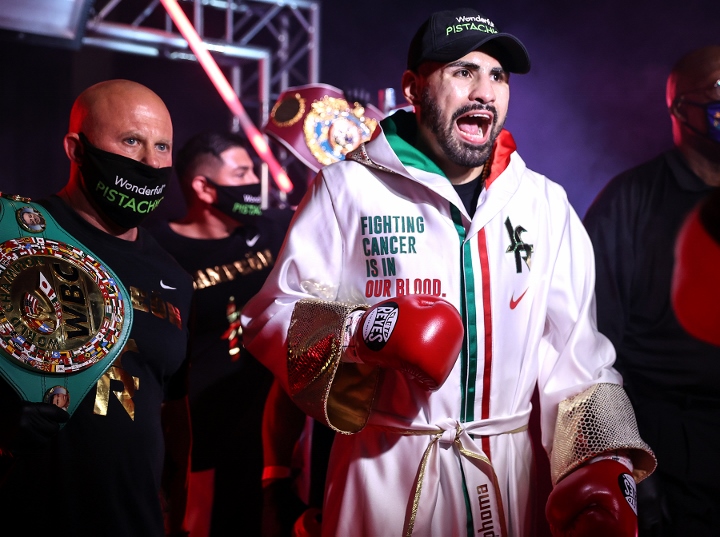 Jose Ramirez is now the number two contender to both junior welterweight titles that were previously in his possession.

A three-week review process conducted by the World Boxing Organization (WBO) ended with Ramirez advancing in its junior welterweight rankings, the sanctioning body revealed late Sunday evening. The former WBC/WBO titlist was one of three boxers required to plead their case with the WBO, joining former lineal and unified lightweight titlist Teofimo Lopez and previous mandatory challenger Jack Catterall in filing such a petition.

In the end, the sanctioning body went with its former titleholder.

“Certainly, the win/loss status in the boxer’s career is a significant factor where fighters have similar, but subtle distinctions regarding their professional merits,” Samuel Viruet, chairman of the WBO Championship Committee, stated in a 12-page ruling submitted to all parties, a copy of which was obtained by BoxingScene.com. “Thus, Jose Ramirez win over [Jose] Pedraza, and Teofimo Lopez’ loss against George Kambosos, creates, therefore, a balance favoring Jose Ramirez higher ranking over Teofimo Lopez in the WBO World Jr. Welterweight Ratings.”

Australia’s Liam Paro (22-0, 13KOs) remains the number-one challenger to the WBO title held by undisputed WBC/WBA/IBF/WBO champion Josh Taylor (19-0, 13KOs), and whose ranking was not eligible for dispute.

The ruling was based on the WBO’s Criteria Requirements, focusing on: positive professional record with special emphasis on boxers’ recent activities; positive amateur record with special emphasis on medals obtained in International and Olympic Tournaments; quality of competition; maintaining rating as a classified fighter; WBO regional titles previously held; Association of Boxing Commissions (ABC) guidelines for objective and consistent criteria for ratings of professional boxers.

Ramirez edged out Lopez and Catterall in nearly every category, thus his promotion to the number-two spot. Catterall remains the number-three contender, where he was slotted following his controversial loss to Taylor while Lopez is now the number-four junior welterweight contender with the WBO.

The debate arose from the most recent update in the WBO rankings, which saw Lopez (16-1, 12KOs) land in the number-two position despite having never fought at junior welterweight and who was coming off a loss. The Brooklyn native and 2016 Olympian for Honduras has not fought since losing his lineal/WBA/IBF/WBO lightweight titles in a twelve-round, split decision defeat to Australia’s George Kambosos Jr. (20-0, 10KOs) last November 27 at Madison Square Garden’s Hulu Theater in New York City.

Catterall was advanced to the number-one slot in the WBO junior welterweight rankings in December 2018, shortly after his October 2018 points win over Ohara Davies in what was considered an upset at the time.

Catterall took on three stay-busy fights while waiting out his mandatory title shot, all coming versus subpar competition and above the junior welterweight limit. The British southpaw hadn’t fought at all since November 2020, allowing then WBO/WBC titlist Ramirez (27-1, 17KOs) to first face unified WBA/IBF titlist Taylor in a May 2021 undisputed championship clash with the guarantee of getting a shot at the winner.

Taylor defeated Ramirez by unanimous decision, after which honoring the pre-fight pact to next face Catterall. Their fight was due to take place last December 18, only for Taylor to suffer a training camp injury which delayed the championship affair by two months.

Catterall will now have to fight his way back into contention—precisely what Ramirez has done, both in and out of the ring.

The lone loss in career of Ramirez—a 2012 U.S. Olympian and well-established pro from Avenal, California—was followed by a competitive but clear decision win over former two-division titlist Jose Pedraza. The fight took place March 4 in his home region of Fresno, California, reminding the world that Ramirez remains among the best junior welterweights in the world.

That viewpoint is shared by the two sanctioning bodies whose titles he previously held. The WBC has Ramirez as its number-two contender, directly behind mandatory challenger Jose Zepeda whom he narrowly edged in a February 2019 title defense. Ramirez was initially installed as the number-four contender with the WBO. The position was immediately challenged by manager Rick Mirigian and attorney Peter Aguayo, who filed a petition on March 25, one day after Catterall’s team plead their own case.

“Considering that Teofimo Lopez, Jack Catterall, and Jose Carlos Ramirez are indispensable parties to this matter, it is hereby ordered that the parties herein submit in writing to the WBO within 72 hours upon issuance of this notice their respective arguments and supported evidence as to why the WBO Ratings Committee shall grant your request,” noted the WBO at the time.

Ramirez did just that.

A foilow-up email was submitted by Mr. Aguayo on behalf of Ramirez, who emphasized that the boxer “satisfies the WBO Ratings Criteria” based on his past accomplishments and now the only one among the three petitioners to come off a win in his most recent fight. Strengthening his case is the fact that Pedraza was a widely regarded former titlist who served as a credible junior welterweight in the eyes of the WBO.

The case presented by Lopez’s legal team—headed by David Berlin—was centered around the hope that the WBO would uphold its original decision based solely on his past accomplishments.

Lopez’s split decision loss to Kambosos was dismissed as the result of “a life threatening, undiagnosed medical condition that, in addition to threatening his life, caused him to him to be admitted to a hospital for treatment. Despite the foregoing circumstances, Lopez went ahead to honor the contract for the event, evincing tremendous courage during the hard-fought 12 round world title fight.”

It was further argued that Lopez’s past accomplishments—former standout amateur who fought in the Olympics, 2018 Prospect of the Year and 2020 Fighter of the Year based on his lineal championship win over Vasiliy Lomachenko—entitled him to the number-three ranking initially granted by the WBO this past February, which at the time was not objected by any other ranked contender.

Lopez’s placement only became an issue after Catterall’s demotion following his questionable loss to Taylor, at which point Lopez advanced to number two. The lofty position became of concern to both Catterall and Ramirez, due to the speculation that Taylor will soon move up to welterweight and thus vacate his multiple junior welterweight belts.

Such a move would leave Lopez in the most favorable position to next challenge Paro for the vacant WBO belt.

The WBO walked back its latest ranking update, in fact demoting Lopez one spot lower than his original placement.

“This Committee agrees that both Lopez and Ramirez significantly satisfy the applicable rating criteria,” noted Viruet. “Furthermore, it is undisputed that their amateur records, their impressive professional records, world championship accomplishments, quality of opposition, their level of activity, their TV exposure, recognitions, and other relevant factors merits that their applications be fairly decided. Emphasizing each of the participants’ most recent fights, were, for Ramirez, was a victory against then number sixth ranked contender and former two division world champion, Jose Pedraza, on March 4, 2022.

“Mr. Teofimo Lopez’s last fight was in October 2021, against George Kambosos. Mr. Lopez suffered a Split Decision loss. Mr. Lopez has not fought in five months albeit his representative alleges, by implication, that claims that it may be the result of his alleged prior pre-existing medical condition. Certainly, the win/loss status in the boxer’s career is a significant factor where fighters have similar, but subtle distinctions regarding their professional merits. Thus, Jose Ramirez win over Pedraza, and Teofimo Lopez’ loss against George Kambosos, creates, therefore, a balance favoring Jose Ramirez higher ranking over Teofimo Lopez in the in the WBO World Jr. Welterweight Ratings.”

Taylor is presently on the hook to next defend versus WBA mandatory challenger Alberto Puello, a fight that was formally ordered earlier this month by the WBA.

Should the Scottish southpaw move forward with the fight, the titles will remain in his possession at least through that point. If Taylor opts otherwise, the WBA belt would at least become vacant and likely with the WBC to soon follow. Zepeda remains the mandatory challenger and unwilling to budge from that position.

If all four belts are vacated, Ramirez then gets to choose whether to challenge Zepeda in a rematch for the WBC title or versus the unbeaten Paro for the WBO belt.

Should a Ramirez-Zepeda rematch come about, Catterall would still have a favorable shot at a vacant title fight with Paro for the WBO belt.