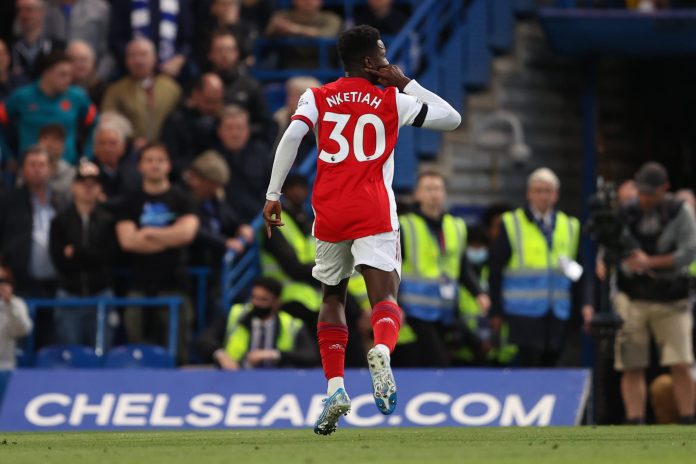 English-born striker with Ghanaian descent Eddie Nketiah was one of the star performers when Arsenal hammered Chelsea 4-2 in the Premier League at Stamford Bridge on Wednesday.

Barely after 24 hours of admitting his readiness to represent Ghana on international level, Nketiah had the brightest of start against Chelsea as he shot Arsenal into the lead by the 13th minute.

Although, Timo Werner levelled the score for Chelsea four minutes later, Emiley Smith-Rowe restored the lead for Arsenal on 27th minute but Caeser Azpilicueta once again pulled even for Chelsea.

However, after the break, Nketiah sent Arsenal into the lead once again with a fine finish before Bukayo Sako sealed the victory through a penalty in additional time.

Nketiah was born in England to Ghanaian parents and although he has represented England at youth level, he is still eligible to play for the West African giants through descent.

Ghana’s interim coach Otto Addo and technical advisor Chris Hughton have been combing around the world in search of talents to add to the already existing squad as the Black Stars prepare to partake in the 2022 FIFA World Cup to be staged in Qatar.

The Black Stars have been pitted in Group H alongside Portugal, South Korea and Uruguay.

“Of course it is a possibility. I’m open to both, playing for Ghana and playing for England as well,” Nketiah told The Beautiful Game podcast when quizzed about joining the Black Stars soon.

“It’s always good to have the opportunity to potentially do that. Both of my parents are from Ghana and I know some of the players like Thomas Partey so it will be cool.

“I’m also happy for them to have qualified to play in the 2022 FIFA World Cup,” he added.