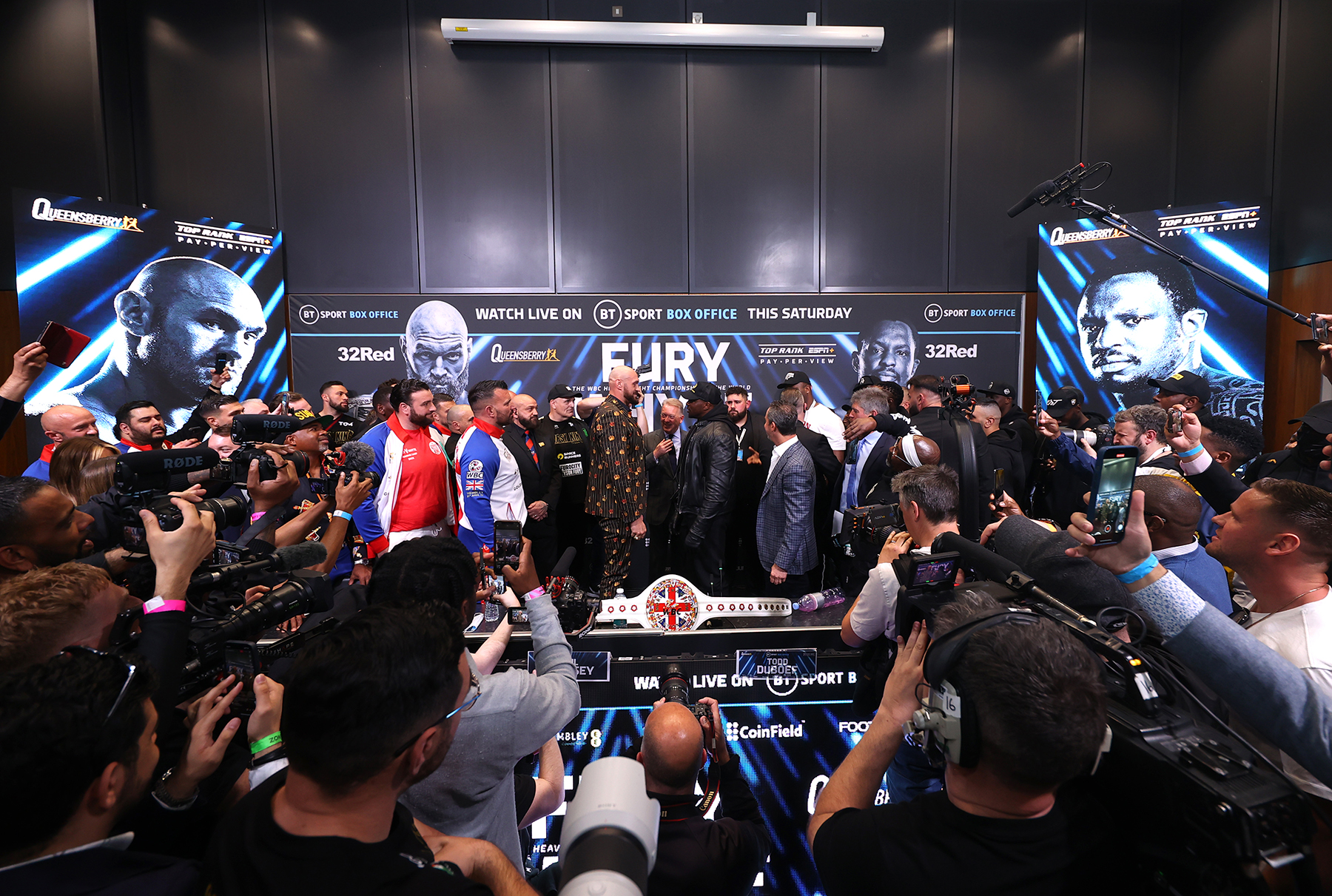 The drama surrounding whether Dillian Whyte would show up for Wednesday’s press conference was much ado about nothing. The WBC Interim heavyweight champion arrived on time, and he and WBC/Lineal/Ring Magazine heavyweight champion Tyson Fury exchanged more pleasantries than trash talk three days out from their showdown at Wembley Stadium (ESPN+ PPV, 2 p.m. ET/11 a.m. PT).

Fury will defend his crown on the world-famous football pitch Saturday in front of a UK-record crowd of approximately 94,000. This is what Fury, Whyte, Queensberry Promotions’ Frank Warren, and Top Rank President Todd duBoef had to say.

“We’ve had a great preparation. There are never any complaints from me. We always do what we can do in training camps and do the best that we can do on the night. I’m sure Dillian Whyte’s had a great training camp as well. He’s a good fighting man. The fans are in for a real treat. I know Dillian. I know him personally, and he knows me. And we’re going to rock n’ roll on fight night. We’re ready to throw down and treat us all to a hell of a barnstorm.”

“It’s been an amazing journey. From where I started all those years ago to the ups and downs and being away from boxing and being fat as f**k, 28 stone. To coming back and being mentally out, a druggie and an alcoholic—all of the rest of the stuff—I’m not ashamed of it. It’s a part of who I am. To coming back and getting back to the top of the world and having three big fights with Deontay Wilder over there in the U.S., and now being back in England after all these years, four years away, and now I’m fighting my old pal Dillian Whyte back at home for all the glory and all the belts. Who would have thought it? We’re looking forward to an awesome, memorable night. This will break all records.”

“Dillian Whyte is a good fighter. He is a good, strong, solid man. He’s big. He’s strong. He’s tough. He’s game. He’s got good power. He’s knocked out a lot of men. He’s had a good learning career as well. He’s got a lot of experience in the fight game. He’s definitely a man that needs a lot of respect. And that’s why I’ve given all this training camp we’ve had. I’ve had everything I can possibly do to train for this. I’ve haven’t left any stones unturned. I’ve trained as hard for Dillian as I have for Wilder or Klitschko

“It means everything to me to be fighting in my home country, and especially because it’s for the world title at Wembley. It’s not too far from where I’m from. It means everything. It’s massive. It’s a moment I’ve been waiting for. It’s a big fight. Like Tyson said, we didn’t expect to be here. But I’m here, but I’ve taken risks time and time again. I’ve had a couple slipups along the way, but I’m here and I’m ready to go. You won’t hear any bullsh*t from me. I’m ready to go.”

On Not Showing Up to Promotional Events
“There was no strategy. There are two sides to his story. You only hear one side of the story because one side says a lot of things. Because I didn’t say anything, everyone was saying ‘you’re scared’ and ‘you’re hiding.’ I ain’t scared of sh*t. I ain’t hiding from sh*t. Stuff needed to get done. Obviously, the fight was signed.  But there were other things behind the scenes that needed to get signed. Me and Frank got together. Credit due to him as me and my team were trying to pick up the phone for a long time to get stuff done.”

“This is one of those fights where I’ve been working on being adaptable. I’m going to have to adapt, make smart decisions, when I need to do what and how I need to do it, and how I need to approach what I’m doing. So that’s it. There’s no strategy here. That’s it. I just need to go in there and do my thing.”

“This is more than boxing. This is the world of sport. This is a global epicenter for entertainment and sport. It’s a tribute to all of us in the room. It’s a tribute to Frank Warren, BT Sport and especially these two prizefighters who have brought it all for the many years and hard work in the gym to elevate the sport. The world is all going to be watching, not only 94,000. This is an honor to be a part of, and it’s going to be a wonderful night. We will all remember this.”

“You’ve got the best heavyweight of his generation, the lineal champion and the WBC champion against a young man over there in Dillian who was been waiting…How long have you been waiting for this fight? 1700 days? He’s been waiting for this fight for 34 years. And it’s here now. He’s got the fight. And, we know he’s in great shape. But he’s got to train hard when you fight a guy like Tyson Fury. He’s told me that it’s been the best training camp that he’s ever had. So, you’ve got both of these guys in tip-top fighting condition. So, what are you going to get on the night of the fight? A great fight.”