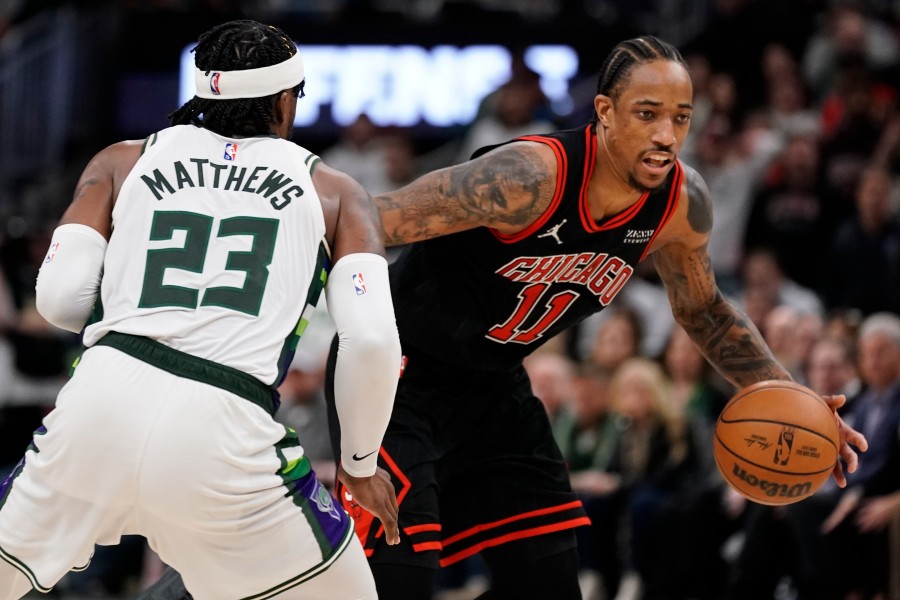 The Milwaukee Bucks suffered a nightmarish Game 2 against the Chicago Bulls on Wednesday.

All that added up to a frustrating 114-110 loss for Milwaukee at Fiserv Forum with DeRozan’s 41 points helping Chicago even the best-of-seven series at 1-1.

Game 3 is Friday night at the United Center in Chicago.

Giannis Antetokounmpo led the Bucks with 33 points, 18 rebounds and nine assists, but it wasn’t enough to keep the Bulls from earning their first playoff win in five years.

“We got to play better,” Antetokounmpo said. “Execute better. Have more fun. I don’t feel like we were enjoying the game as much as possible.”

The Bucks looked out of sorts from the start. They had three turnovers, a missed three-pointer and an errant jumper as the Bulls raced out to a 9-0 lead.

Milwaukee bounced back thanks to 2 three-pointers by Wesley Matthews to tie the game at 16-16, but Chicago led, 29-28, after the first quarter.

The second quarter wasn’t much prettier for the Bucks. After committing 21 turnovers in Game 1, the Bucks also struggled to take care of the ball again. Jrue Holiday and Khris Middleton combined for eight miscues in the first half.

Milwaukee finished with 15 turnovers, including six by Holiday. Chicago scored 19 points off those mistakes.

“Credit to Chicago,” Bucks coach Mike Budenholzer said. “Especially those early ones. The hands and the activity. Getting deflections. Creating turnovers. We got to be sharper.

“Sharper with our spacing. I think we have to screen better. Just be better with our passes. Then at times as the game went on just playing a little bit fast. Need better spacing. Better decisions.”

Holiday also picked up his third foul late in the second quarter and key Bucks bench player Bobby Portis was lost for the game with a right eye abrasion after getting elbowed while fighting for a rebound with Chicago’s Tristan Thompson.

The Bulls pushed their advantage to 63-49 at the break. The only highlight for Milwaukee in the first half was Antetokounmpo passing Kareem Abdul-Jabbar’s 1,692 points as the franchise’s career playoff leader.

While Bucks fans were still pondering what was going wrong, the Bulls took an 18-point advantage early in the third quarter.

Milwaukee surged back to within 81-78 with a 15-2 run highlighted by a four-point play from Middleton.

The Bucks let DeRozan score the four points in the final 33 seconds of the third quarter to take an 87-80 lead. DeRozan had 13 points in the quarter.

Chicago added the first nine points on the fourth quarter.

“We didn’t finish,” Budenholzer said. “We made a good run. Then the last minute, minute-and-a-half of the third quarter I thought we could have been better. Then coming out in the fourth quarter, another big swing.”

Milwaukee Bucks’ Giannis Antetokounmpo and Chicago Bulls’ Alex Caruso go for the ball during the first half of Game 2 of their an NBA playoff basketball game Wednesday, April 20, 2022, in Milwaukee . (AP Photo/Morry Gash)

To make matters worse for Milwaukee, Middleton hurt his left leg and went to the locker room with 6:49 remaining. He did not return. After the game, Budenholzer said Middleton suffered a MCL sprain and the team would know more about his status after a MRI on Thursday.

The Bucks made a push to get within 102-94, but the Bulls’ Zach LaVine nailed a three-pointer in the right corner at the 4:56 mark.

Milwaukee had another run to close the gap to 107-102 on a three-point by Holiday. But then Holiday missed a point-blank shot and Chicago’s Nikola Vucevic nailed a three-pointer with 2:30 left.

The Bucks’ last gasp came when Brook Lopez converted a three-point play with just under a minute remaining. Milwaukee, however, let Chicago grab two offensive rebounds and DeRozan swooped in for a layup for a 114-109 advantage that sealed the victory.

“I think we’ve been in a lot of situations where we grab those rebounds or it goes our way,” Holiday said. “Feel like most of the time when we’re in that situation we win and you’re not going to win all of them. It’s just something you have to learn from.”

The Bucks finished 20 for 31 (64.5%) on free throws. Without Portis for most of the game, Milwaukee’s bench contributed just eight points.

DeRozan shot 16 for 31 with most of his damage coming in his preferred midrange area.

“He just caught a rhythm,” Holiday said. “He kind of has this between-the-leg pull-up that he does when he starts getting going and he had a couple of those. Just got into a rhythm.

“Top of the key, around the free-throw line. Taking those shots and taking 30 of them. At some point you’re going to get a rhythm. I think we did a pretty good job, but I think we can do a little bit better. Just being aggressive. Making it hard for him. Making him real uncomfortable.”