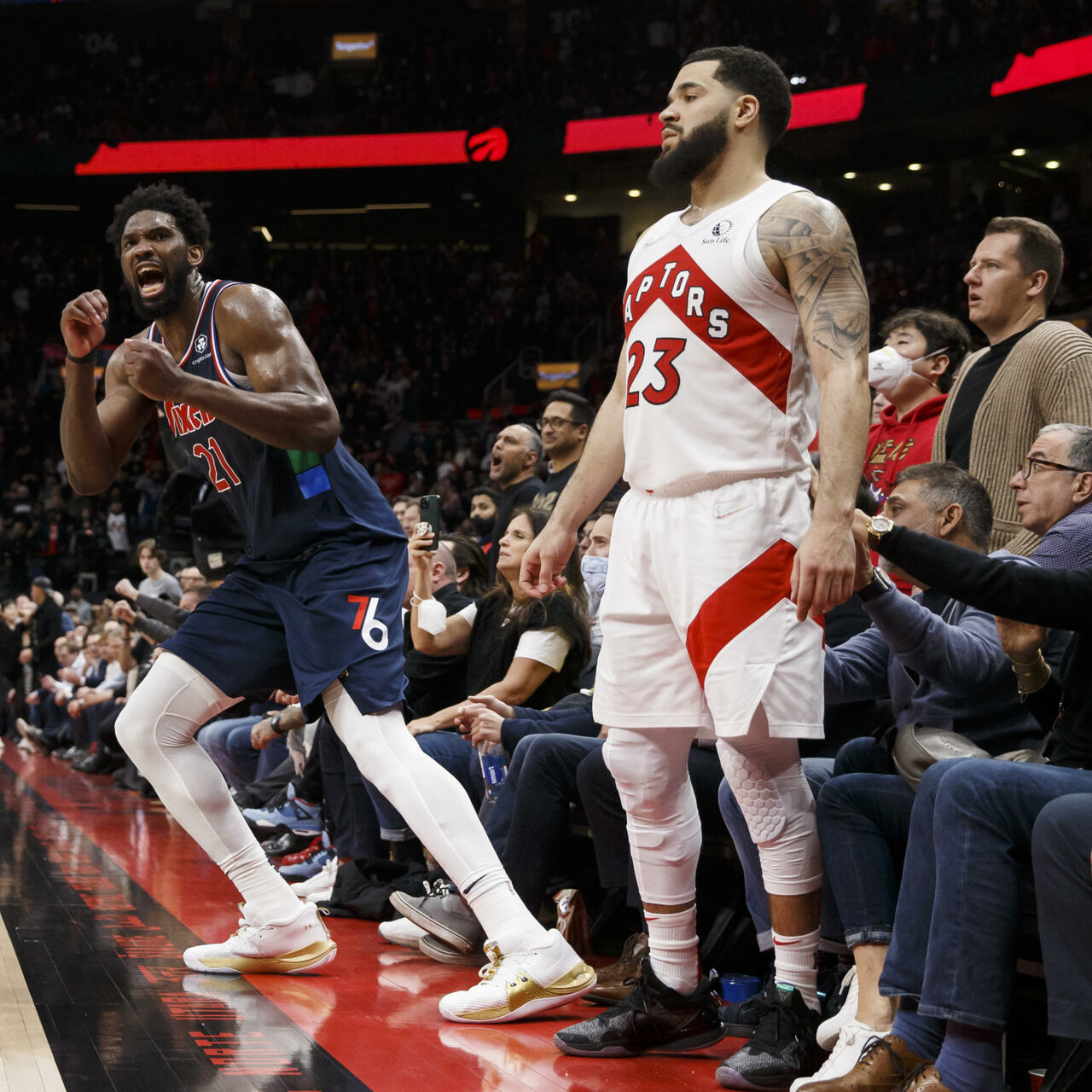 TORONTO, ON - APRIL 20: Fred VanVleet #23 of the Toronto Raptors looks on as Joel Embiid #21 of the Philadelphia 76ers celebrates a three-pointer in the final seconds of overtime in Game Three of the Eastern Conference First Round at Scotiabank Arena on April 20, 2022 in Toronto, Canada. NOTE TO USER: User expressly acknowledges and agrees that, by downloading and or using this Photograph, user is consenting to the terms and conditions of the Getty Images License Agreement. (Photo by Cole Burston/Getty Images)

Joel Embiid hit a stunning three-pointer with 0.8 seconds remaining to give the Philadelphia 76ers a shock 104-101 overtime NBA playoff victory over Toronto on Wednesday.

Joel Embiid hit a stunning three-pointer with 0.8 seconds remaining to give the Philadelphia 76ers a shock 104-101 overtime NBA playoff victory over Toronto on Wednesday.

NBA scoring champion Embiid, a 28-year-old center from Cameroon, took an inbound pass near the sideline with less than a second on the shot clock, turned to the hoop and fired, sinking his first career last-second game winner after 14 prior misses.

“That’s the best one,” Embiid said of his last-second shots. “Just get the ball to me or whoever was open. We did that and I’m glad I made a good play.”

Embiid, a 2022 NBA Most Valuable Player award finalist, scored a game-high 33 points and grabbed a game-high 13 rebounds as the visiting Sixers rallied from a 17-point deficit to seize a 3-0 lead in the best-of-seven series with game four on Saturday.

“The job is not done,” Embiid said. “We’ve got one more. We’ve got to come back here and try to beat them again.”

Philadelphia trailed by as many as 17 points and never led until overtime.

The Sixers weren’t the only team to overcome a 17-point hole as the host Boston Celtics took a 114-107 fightback victory over Brooklyn thanks to a fourth-quarter rally, seizing a 2-0 series edge over the Nets.

At Milwaukee, the defending champion Bucks tried to rally from 18 points down but visiting Chicago got an NBA playoff career high 41 points from DeMar DeRozan in a 114-110 triumph that leveled their series at 1-1.

Philadelphia’s James Harden had 19 points and 10 assists before fouling out in the final seconds of regulation time. Tyrese Maxey added 19 points and Tobias Harris had 11 points and 12 rebounds for the 76ers.

It was a heartbreaker for the Raptors, who were led by 26 points from O.G. Anunoby and 24 from Gary Trent Jr. with Precious Achiuwa adding 20 off the bench.

The 76ers matched a season high with 21 turnovers, 15 in the first half setting up 21 Toronto points.

“We have to take care of the ball, don’t allow last second chances, move the ball to each other and make plays,” said Embiid, who was ripped at half-time by Sixers coach Doc Rivers with Toronto ahead 56-46.

“The first half I was just floating around. I didn’t really want the ball,” Embiid said. “Coach got on me, said I’m the biggest guy out there and I have to dominate. That’s what I tried to do.”

Bulls hold off Bucks
DeRozan, who had a private extra shooting session Tuesday, lifted a Chicago squad that lost all four times this season to Milwaukee and in the playoff opener.

“We came together,” DeRozan said. “We had some man to man talks as a team. Everybody has to man up. We just took on the challenge.”

Greek star Giannis Antetokounmpo had 33 points, 18 rebounds and nine assists in a losing cause.

The Bucks pulled within 112-109 late on a three-point play by Brook Lopez, but DeRozan made a late driving layup and Antetokounmpo had an offensive foul to doom Milwaukee.

At Boston, Celtics star Jaylen Brown scored 10 of his 22 points in the fourth quarter and Jayson Tatum added 19.

The Nets never trailed until the final eight minutes as Boston charged back from a 17-point second-quarter deficit.

Kevin Durant led Brooklyn with 27 points but was tested all night by swarming, physical Boston defenders in a bruising contest — the Celtics having led the league in defensive statistics.

Former NBA MVP Durant shot 4-of-17 from the floor, 0-for-10 with four turnovers in the second half.

Grant Williams had 17 points off the Boston bench while Al Horford had 16 points and Daniel Theis added 15 for the Celtics.

Bruce Brown had 23 for Brooklyn and Goran Dragic added 18 off the Nets bench.

The Celtics couldn’t grab their first lead until reserve Payton Pritchard hit a jumper to make it 94-92 with 7:49 remaining.

The Nets managed only two points over four minutes and Boston unleashed a 23-4 run in the fourth for the triumph.