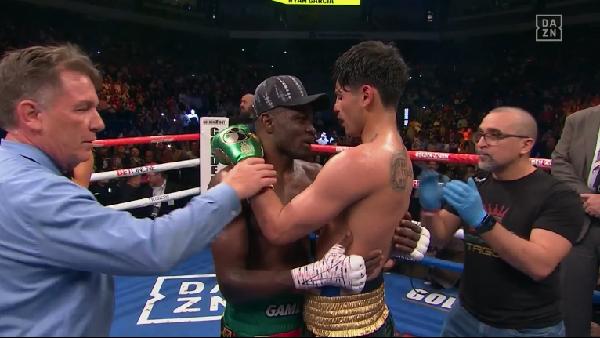 When Emmanuel Tagoe arrived in Accra from the US following his loss to Ryan Garcia, his Jamestown folk trooped to the airport and gave him a ‘heroes’ welcome. This was followed by a procession all the way to Jamestown where people cheered and danced – a scene similar to the arrival of a world champion.

The obvious question which followed that was why are we celebrating? Why the carnival atmosphere when the boxer lost the bout?
A common theme run across the responses: “We want to encourage him, he showed courage in the ring and we want to let him know that’s why we support him and we want him to bounce back and do way better than this.”

During an exclusive conversation with Tagoe, he revealed that his right hand was gone. Apparently a pre-fight injury – a broken right finger and the inability to clinch his fist properly almost ruled him out of the bout. According to the former IBO champion, nobody expected him to have the courage to go ahead with the bout considering the severity of the injury.

So this was a bout Tagoe had desired for a while and chickening out had major implications. His troubles a day to the fight were so severe that even high left foot had to be treated by the doctor.
My injuries are not an excuse. I don’t like making excuses in boxing. I wanted to kill myself for my nation and that’s why I kept pushing myself. This was a big opportunity and I am hoping that based on this I can get even bigger opportunities in the future.”

But this misfortune Tagoe suffered is not novel to the sport. Immediately after the famous meeting between Floyd Mayweather Jnr and Manny Pacquiao, the latter revealed he had a shoulder injury. If these circumstances were the opposite, they may not necessarily have won the bouts for the victims’ bout could have improved the competitive nature.

Emmanuel Navarette fought Ghana’s Isaac Dogboe with an injury. The only difference is that Navarette performed well and defeated the Ghanaian in Tucson Arizona. The Mexican had signalled his pain in the 11th round by raising his right hand.

Another of such similar example is Joshua Clottey who returned to Ghana from his IBF welterweight title triumph against Zab Judah with his hand in a sling. Clottey unknown to many has battled knuckle injuries for years in the lead up to that fight which clearly defined his career.

Clearly, Garcia won the bout after rounds of dominance. It was a super lightweight contest, not a lightweight (135kg limit) bout as expected. Garcia came in the heavier of the two having a weight of 139.
So Tagoe was heavily criticized for having a non-existent attack which clearly was a result of his injured right.

“You realise that I hardly threw my right during the bout. It was because I had just slipped my hand into the gloves. I could hardly clench my right fist properly and also had a broken finger,” he revealed to Joy Sports.

Tagoe also argues that things could have been different if he had both hands functioning properly.
“I know I lost to Garcia but no one else can beat me at 135 kg. I know all f them and I know what I am talking about,” he confidently said.

His credit which must be given him however, is his consistent bounce and dance around the ring to keep safe. He went in knowing how dangerous Garcia was and made the effort to avoid him.

The future
Tagoe’s sacrifice for now, has proven worth it. Sacrifice in the sense that he chose pain and struggle over walking away from what clearly has been a big opportunity. Fighting on the platform the legendary Oscar De La Hoya’s Golden Boy Promotions and DAZN’s network was clearly the biggest of his career so far. The fact that he stood with the dreaded Ryan Garcia over 12 rounds has opened some good windows.

There is a high likelihood that he will drop to the super featherweight class and vie for a title there. “We had some conversations after the fight and by fight months time is should fight for a major world title,” Tagoe confirmed.

This means that Tagoe will set his sights on Roger Gutierrez of Venezuela who holds the WBA title, Oscar Valdez who hold the WBC title, Japan’s Kenichi Ogawa, the IBF Champion and WBO titlist Shakur Stevenson.