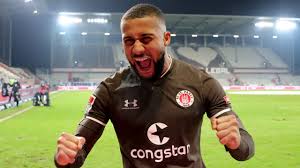 Ghana attacker Daniel-Kofi Kyereh is one of 100 players nominated for the EA Sports Ultimate Team Community Team of the Season.

The team, which is voted on by EA Sports account holders, recognizes players who have appeared consistently for their clubs throughout the season. If Kyereh is selected, he will be given a special card in the FIFA 22 Ultimate Team game mode.

“I got nominated from @EAFussball to get a special card. I feel honored and grateful to share this with you guys. And would appreciate if you can vote for me under the link below,” Kyereh wrote.

With 11 goals and 9 assists in 26 league games, the St. Pauli midfielder has been instrumental in his team’s promotion push.

The Hamburg-based club has not competed in the Bundesliga since the 2010/11 season, when they finished last (18th).

St. Pauli are currently third, in the only playoff spot, but are three points behind leaders Schalke 04.