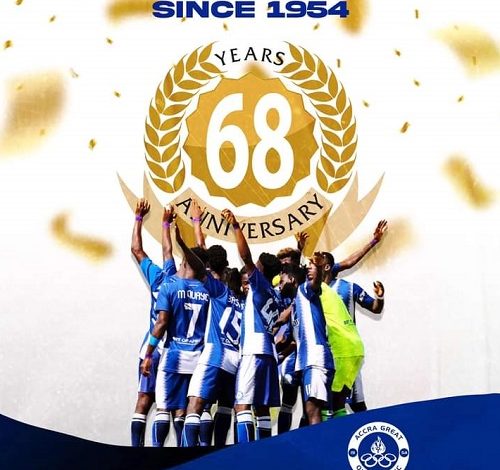 Accra Great Olympics football club was formed on April 21, 1954 at Sakumo Tsoshie, a suburb of Accra. It can be said to be a break-away group from one of the formidable clubs then, Accra Standfast.

It must be put on records that the Standfast regular players left the block and joined S. O Glover to form Olympics. One of these were founding players is Ayi Armah who is still alive.

The young club, Accra Great Olympics went through thick and thin, and on the formation of the Arm Force team, Defense Stars, most of the Olympics regular players who were soldiers notably Leonard Acquah were drifted to the Defence Stars.

However, with the effort of their hard-working Coach, Mr. A.A Ampofo also know as Kofi , Charley, young players like Frank Odoi (V.C 10), Anue Cofie, and Nsiah to mention a few, were recruited to fill the void created.
The club then places third behind Kotoko and Hearts of Oak. Hence, the accolade, “The Wonder Club” was bestowed on the club by the director of C.O.S, Mr. Ohene Djan.

The club since then, won some important trophies like the Premier League on two occasions, the first time in the year 1970 when they went unbeaten the whole season and later went on to win the 1974 season as well.
The club also prides itself as three times FA Cup winners 1975, 1983, and 1995 and a one-time super Cup winner after beating Asante Kotoko in the 1975 edition.

In the year 1963, Great Olympics were chosen to represent the nation in a game against Togo where they became victorious in a 2-1 scoreline.