Feature: A good start for Takyi but... 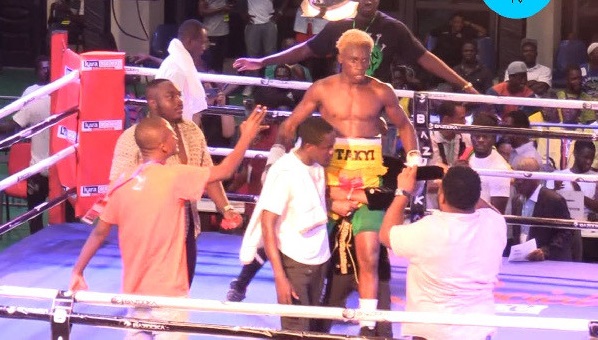 Samuel Takyi had an impressive debut on April 15 but the question remains whether he got the stiffer opposition he deserved.

The 21-year-old made mincemeat of journeyman Kamarudeen Boyefio during a super featherweight contest to kick-off his pro career.

Having known Takyi during his amateur days, I wasn’t surprised at his performance on the night but I expected to see him fight a much credible opponent.

I understand that on his debut, opponents like Boyefio would be used to open a successful chapter in Takyi’s career but such fighters should not be seen not being competitive.

Takyi is a prospect and must not be paired against mediocre boxers that could derail his progress. He is an Olympic bronze medallist who deserves to fight the best in his weight class locally.

The likes of Floyd Mayweather and Deontay Wilder all won bronze at the Olympics and went on to become great fighters of their generation.

Takyi can emulate that but it must be well-planned to get the best out of the youngster. That will be very important in the next set of opponents he would face in the ring and I hope his promoters go for the best.

In my last chat with Takyi, he said he wanted to build his career at the lightweight division and I think it is not going to be easy for him at 135 pounds.

Having fought at 126 pounds during the Tokyo Olympic Games, I didn’t expect him to struggle to make the super featherweight requirement of 130 pounds within eight months.

That isn’t good for an upcoming pro fighter who wants to make it big in the sport. This could only mean Takyi is not being disciplined and that should be a worry to him and his handlers.

Making a required weight shows how disciplined a boxer could be and the fact that Takyi is struggling with it means he is not doing something right.

I don’t expect that to be happening to him now, especially when he is being trained by the legendary Ike ‘Bazooka’ Quartey, a former WBA welterweight champion.

Looking at the variety of talents and champions in the lightweight division currently, I believe Takyi has a lot of work to do to reach the top.

Locally, there are known lightweights he could test himself with if he wants to improve his career. Takyi needs them to build a reputable career for the future.

If he is able to go past such opponents, he would be ready to make a meaningful career abroad when he finally decides to relocate to the US.

I don’t know when next Takyi will make a return to the ring but whoever he decides to fight must be a credible opponent.

He should be looking at challenging for the vacant national lightweight belt in the shortest possible time to push him up the lather.

The future looks bright for Takyi if he is ready to take his training seriously and avoid any distraction from a discipline sport such as boxing.

I trust Ike Quartey to instil that discipline in him knowing what it takes to attain a legendary status in the sport. It is not going to be easy but with dedication, Takyi has everything to emulate his trainer in the ring.

The only advice I have for him is that, being an Olympic bronze medalist means nothing at the pro ranks and there have been numerous champions at the global sporting showbiz who failed to live up to expectations.