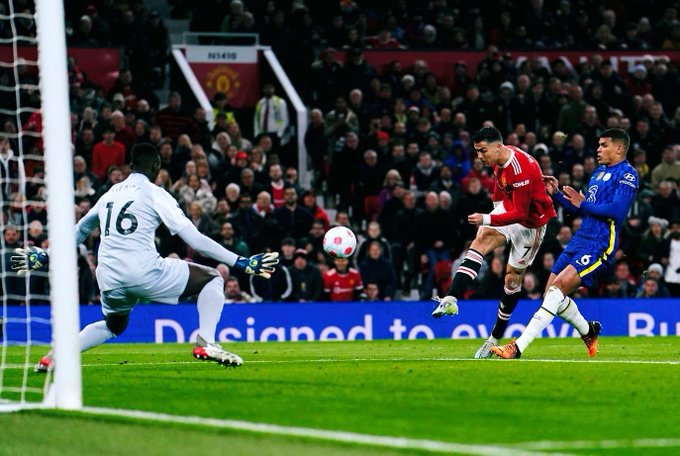 Cristiano Ronaldo ended his Premier League goalscoring drought against Chelsea to instigate a a spirited 1-1 draw for Manchester United against Chelsea.

The Blues were one of the few opponents Cristiano Ronaldo had not managed to score against in the Premier League, despite his history with the west Londoners. That changed tonight.His 101st league goal for United galvanised his team after a disappointing first hour for the Reds. Chelsea had controlled most of the game and had just taken the lead through Marcos Alonso.

Yet, just two minutes later, a cute ball over the top from former Blue Nemanja Matic found Ronaldo, who fired his finish into the net after a fine first touch.

Only Liverpool forward Mohamed Salah has scored more Premier League goals than the no.7 this season.

Ronaldo’s tally of 17 is the same as Tottenham star Heung-min Son in joint-second place in the chart of the leading marksmen.

The 37-year-old shows no sign of losing his goalscoring touch. He has now netted 23 goals in all competitions this season – the same tally he managed when he was 23 years old, in the 2006-07 season.

Of course, Ronaldo did manage to score one famous goal against Chelsea – in the 2008 Champions League final, when he rose to head in Wes Brown’s right-wing cross. That night in Moscow would end in glory, following a penalty shoot-out.

The Portugal international has also managed a couple of assists in the past against the capital club.