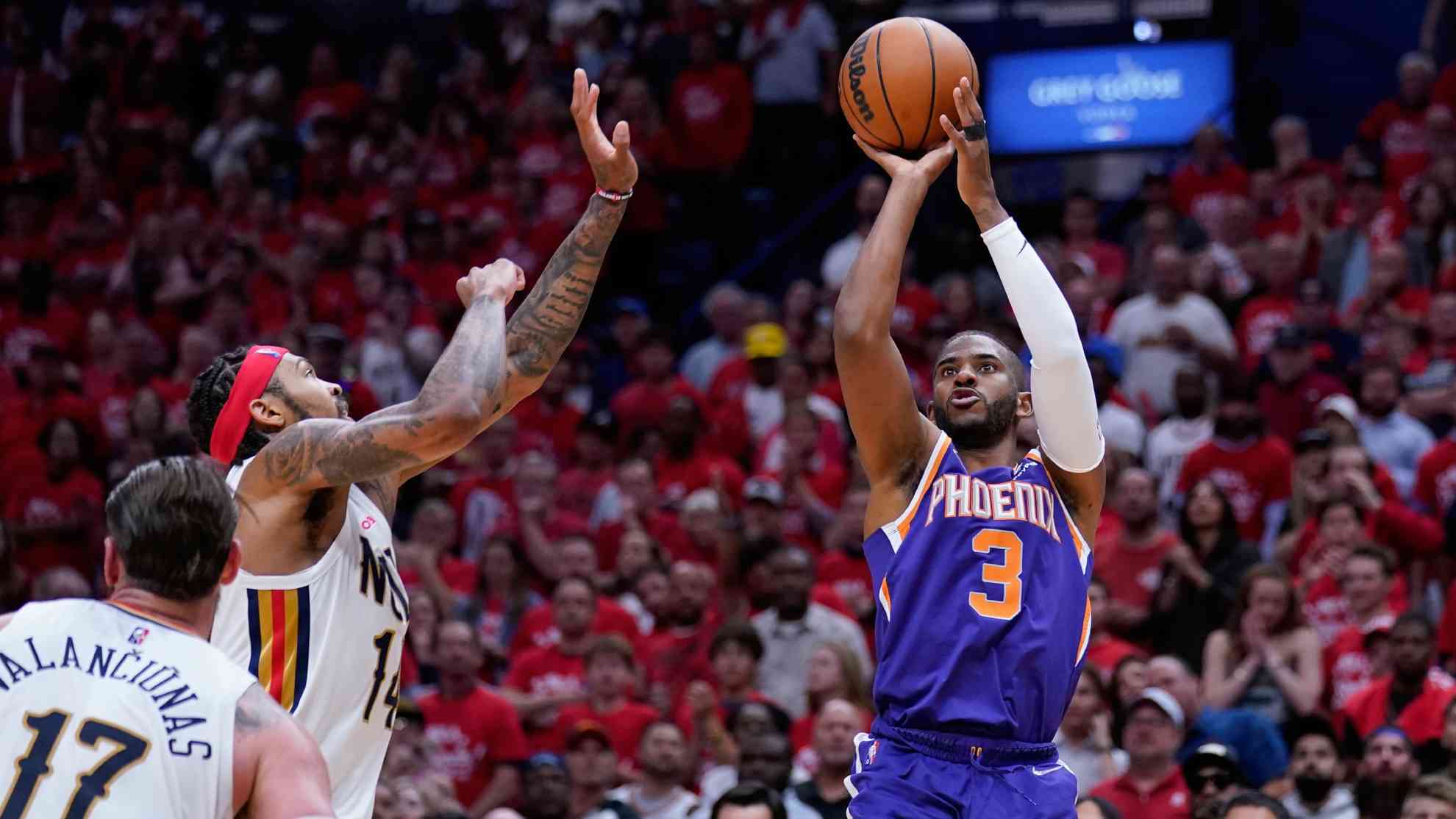 The Phoenix Suns needed a perfect performance from their leader Thursday night.

Devin Booker wasn’t himself after missing three games with a right hamstring strain.

The New Orleans Pelicans were leading by double digits and their sellout crowd of 18,962 was dialed up to 110, but Chris Paul silenced them time and time again in leading the Suns to a 115-109 closeout win in Game 6, taking the series 4-2.

Shooting a perfect 14-of-14 from the field, Paul finished with 33 points to become the first player in NBA playoff history to make 14 field goals without a miss.

“Yes, we needed it,” Paul said. “They really pushed us. Somewhere in the second quarter, I told (Coach Monty Williams), ‘I’m going to get aggressive.’ I told him that and then coming out in the third quarter, I sort of saw how the game was going and we were down by ten. I knew I was going to have to force the issue.”

It is the most field goals any player has ever made without a miss in the postseason ever.

“Chris did something historical tonight,” said Williams of Paul, who scored 13 points on 6-of-6 shooting in the third quarter. “We needed it to win a game like this in front of an unreal crowd.”

The top-seeded Suns will advance to the conference semifinals to face the Dallas Mavericks, who closed out the Utah Jazz on Thursday to win that series 4-2.

“I think we really came together as a team and as a unit and got the job done,” Suns forward Jae Crowder said.

Booker finished with 13 points, 11 coming in the second half.

“I just made sure my body was ready. I was confident in it, and I tested it,” Booker said. “I got some good work in yesterday, and I knew the adrenaline was going to kick in. It was time to go, and this was a big game for us.”

“He was on that left wing and I don’t know if they forgot or didn’t realize who he was, but I looked over and saw how they were shifted and that was probably the biggest of the game,” Paul said.

Then Mikal Bridges stole the ball from CJ McCollum and went coast-to-coast for a jam to put the Suns ahead by four, 108-104 with 1:28 left.

“In a crowd, in an environment like this, all we have is us, and I was just out there with him,” Williams said as he was running down the sideline while Bridges finished at the rim. “I could see what he was doing. He got the ball and I made an attempt. A bad attempt, but I was just so happy that he made that play.”

Deandre Ayton finished with 22 points on 10-of-12 shooting while Bridges added 18.

The Suns won the regular-season series 3-1 over New Orleans, but the Pelicans entered the series with major momentum after winning two games in the play-in tournament to grab the eighth seed.

Then they tied the series 1-1 with a Game 2 victory in Phoenix where Booker suffered the hamstring injury that sidelined him for three games.

Phoenix won two of those three but lost Game 4 by 15, which guaranteed a return to New Orleans for Game 6. The Suns bounced back to win Game 5 to regain momentum.

Then with the return of Booker, Phoenix appeared ready to roll past the pesky Pelicans and end the series, but needed a perfect performance from Paul to win.

“Very optimistic,” Pelicans first-year coach Willie Green said. “I said it before, our future is bright. We’ll soak this up, a number of things. The playoff experience was great for us, elimination games, the play-in experience leading up to that and then this loss. We feel it, so like I told our guys in the locker room, I will work this summer. It’s going to determine what happens next season, and we’ll be back in the gym getting it in, getting ready.”

After the game, Williams and Green embraced. Green was the lead assistant under Williams the previous two seasons.

In tears, Green later hugged Booker and Paul while heading off the court.

“Willie is the man,” Booker said. “He actually reached out to me when I hurt my hamstring. He told me that even though we’re competing, he was praying for me and hoped that it healed up quick. He’s just a stand-up-guy and always has been.”

Paul and Green were teammates in New Orleans and with the Los Angeles Clippers.

“I don’t think people will ever really understand the relationship between me and Willie,” Paul said. “I’m not in Phoenix if not for Willie. He’s the first person that ever even knew about the thought of me coming to Phoenix. He’s a coach, but he’s my teammate and my brother first and foremost. I was on the baseline seeing his son, Mason. Willie is my family, so not talking to him or communicating with him throughout a series is tough. You know at the end of a series somebody isn’t going to win, so this is probably one of the weirdest things I’ve ever been a part of.”

The Suns will have three days off before the conference semifinals. That will give Booker time to recover even more from the injury, although Williams said Booker kept telling him the hamstring felt good.