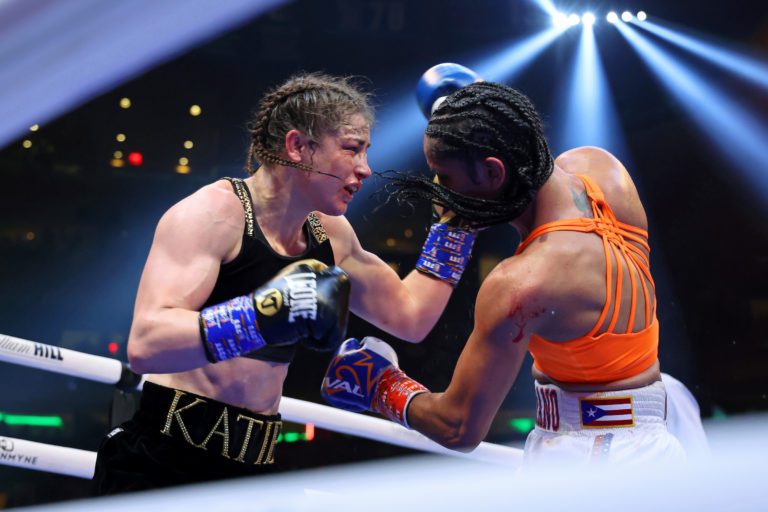 In a thrilling 10-round battle that lived up to every bit of the hype at Madison Square Garden, Katie Taylor rallied in the second half of the bout to score a close split decision win over Amanda Serrano to retain her undisputed lightweight championship.

In front of a roaring sellout crowd at “the world’s most famous arena” for the most anticipated women’s title bout maybe ever, Taylor now 21-0, 6 KOs, found herself behind on the scorecards headed into the late stages of the fight. But, showing the heart of a champion, Taylor came on, when it mattered most, to get the narrow decision win.This came on scores of 97-73, 96-93 for Taylor, who defended her titles for the seventh straight time as undisputed champ. Meanwhile, the one dissenting judge had it 96-94 for Serrano.

Serrano, now 42-2-1 and the unified featherweight world champion, was clearly the better fighter in the first half of the fight taking control from the southpaw stance with straight right hands and lefts behind it. Her best round with the 5th, when she repeatedly rocked Taylor with combinations, staggering the champion and causing the crowd to roar in excitement for the first of several times on the night.

Serrano was not able to put Taylor down, but had clearly demonstrated she had the power to do so. Serrano stayed active in the sixth round, again scoring with straight left hands and seemed to have built a comfortable lead to that point in the fight. But, that’s when the Irish former Olympic Gold Medalist responded from the seventh round on, especially.

Taylor was landing with lead right hands as Serrano appeared to be wearing down and her punch output dwindled in the final third of the bout. Taylor took advantage being a more aggressive fighter scoring with combinations, including hard right hands. The champion fought like it in the 10th and final round backing Serrano up with hard rights and lefts and cutting her right eye. Thus, making a final key impression on the judges.And, in the end the Irish hero got the nod on two of the three judges cards by winning all three of the final rounds of the fight on all three cards.

“I’m just grateful to have been in this great arena in this fight,” Taylor said to DAZN in the ring post fight. “I knew I had to dig in the middle of this fight. She’s a great fighter, a great champion. I knew I had the heart and the skill. I was able to come through.”

The loss for Serrano was not only just her second, it was her first in 10 years dating back to April 2012, but she was gracious despite believing she’d won the decision.

“I’m truly honored to share the ring with you. This crowd… Wow. Women can box. Women can fight. We put on a a hell of a show” Serrano said after the bout. “I believed I had won. I hit her with the harder punches…it is what it is.”

Taylor’s promoter, Eddie Hearn of Matchroom Boxing, said immediately after the bout that they’d welcome a rematch to be held in the U.K. Serrano has indicated that win or lose that she would fight Taylor, again.

And, having seen action and the roaring crowd that got their money’s worth, a rematch will be worth more money for Taylor and Serrano and makes a lot of sense for both.