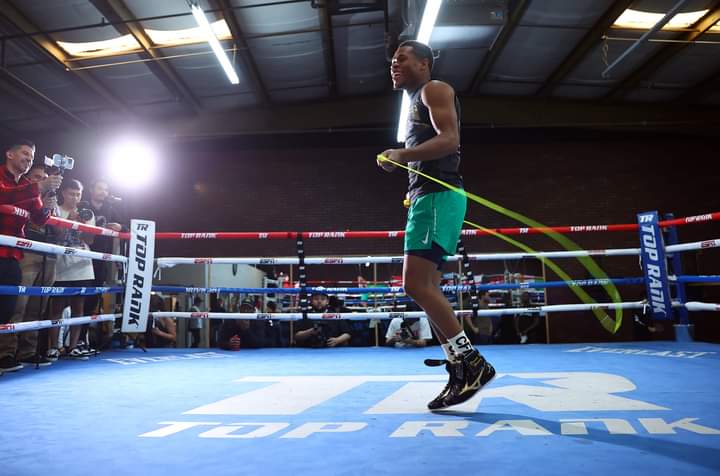 Haney and his trainer/father, Bill, conducted a media workout Thursday at the Top Rank Gym. Haney is making the fifth defense of his world title and attempting to become king of the lightweights at only 23 years of age.

ABOUT DIBELLA ENTERTAINMENT
In May of 2000, Lou DiBella launched DiBella Entertainment (DBE), a full-service sports and entertainment company, which has become one of the most successful promotional entities in boxing. Serving as matchmaker, television distributor, marketing advisor, and promoter, DiBella has developed an exciting stable of championship caliber, world-class fighters, such as Sergio Martinez, Bernard Hopkins, Jermain Taylor, Micky Ward, Deontay Wilder, and George Kambosos, among others. DBE clearly established itself as an industry leader with the successful launch of its monthly-televised “Broadway Boxing” series in November 2003. Prior to becoming a promoter, DiBella held an 11-year tenure as the Senior Vice President of HBO Sports. While at HBO, DiBella created and established the highly successful “Boxing After Dark” series, which featured some of the sport’s greatest fights. He is also a well-known fixture in the film industry, having worked as an Executive Producer for the film “Love Ranch”, as an Associate Producer on “The Fighter”, and making his acting debut in “Rocky Balboa”. He also produced or executive produced numerous documentaries, such as Viva Baseball!, Magic Man, Maravilla, Larry Flynt for President, and Tapia. The President and Managing General Partner for the Richmond Flying Squirrels baseball team, DiBella proudly wears his 2010, 2012 and 2014 World Series rings, as his team is the class AA affiliate to the San Francisco Giants. In 2017, DiBella also became the CEO and Managing Owner of the Montgomery Biscuits baseball team, the AA-affiliate of the Tampa Bay Rays. DiBella was elected into the International Boxing Hall of Fame in 2020 and will be inducted in June 2022, as well as the New York State Boxing Hall of Fame in 2014 and the Connecticut Boxing Hall of Fame in 2015.

ABOUT VISIT VICTORIA
Visit Victoria is the State of Victoria’s primary tourism, business and major events company, leading the sector in creating, curating and communicating Victoria’s inspiring experiences to maximise visitation. Established in July 2016, Visit Victoria brings the best of Tourism Victoria, Victorian Major Events Company and Melbourne Convention Bureau under one brand that capitalises on commercial opportunities in an increasingly competitive and dynamic global tourism market. The team operates in a collaborative and agile environment that informs, connects and partners with industry and the Victorian State Government to amplify Victoria’s profile.